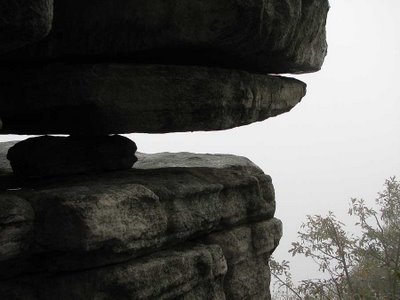 In literature we frequently find references to rocks. They are seen as being solid, durable, strong, and impenetrable. In times past rocks were used to build pyramids, fortresses, and many other massive imposing structures. During our Civil War General Thomas J. Jackson earned his name “Stonewall” at the battle of the First Bull Run for standing in the midst of shot and shell unflinching. General George H. Thomas earned the nickname “The Rock of Chickamauga defending Chickamauga Creek in northwestern Georgia.
Have you noticed how banks and large government buildings are frequently made of stone? Mankind’s intuitions are only as strong as the faith of the people. Imposing masonry structures have an aurora of strength, stability, and permanence designed to bolster our faith in them. Just like the soldiers mentioned above they may not be as solid and eternal as they first appear. They may in fact be supported by only a small underpinning without which they must surely fall.
This outcrop on the edge of a precipice portrays all of these characteristics.
Posted by Coy Hill at 9/23/2006 06:16:00 AM

One of my favorite Psalms, I'm going to do a post on that some time.

That thought would preach!

Powerful imagery.
Christ is the Cornerstone.