Reflections of the Past 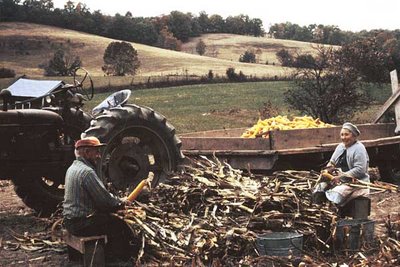 In my youth our family consisted of three generations living under one roof on the family farm. Our farm was consistently behind in technology. Corn was the last harvest of the season and as such it seemed there was no hurry finishing the task.

The process started cutting the corn with a binder pulled behind the Farmall H tractor. The binder tied the corn in small bundles and dropped it on the ground. Once the cutting was done we would pick up these bundles placing a number of them together in a shock. To weather proof the shock it needed to be tied tightly. This was accomplished by wrapping a rope around it and with a person on each end pulling it as snug as possible then wrapping a twine around the tightened shock and securing it. After an appropriate time to dry the shocks were then taken down and each and every ear husk by hand. The ears were then put on a wagon, hauled to the crib and shoveled into it. The corn fodder (stalks) were retied into bundles and set up into shocks to be fed to the cattle during the cold days of winter.

One of grandpa’s hobbies was growing watermelons. He grew some of the largest, sweetest watermelons for miles around. Late each summer many friends and relatives would come for a Sunday afternoon visit and watermelon feast. As the threat of frost would near Grandpa would pick the remaining watermelons and place them in the corn shocks through out the field. Of course he couldn’t remember which shocks contained the melons so when one was discovered while husking it was time for a break.

Life moved much slower in those days. It didn’t seem as if people were in the hurry they are today. Neighbors visited neighbors; families spent many Sunday afternoons together. Have we really improved our lives with the fast passed atmosphere of the present?

This photograph was taken with my Minolta SLR

I love this picture and your commentary. Good food for thought.