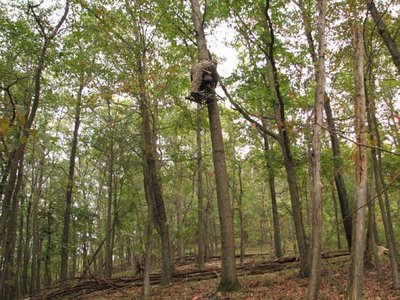 Pennsylvania has a long standing tradition of deer hunting. Deer hunting has been passed down through the generations from father to son and so on. Rural Pennsylvania is a land of forested mountains with valleys of farmland interspersed with woodlots. This constitutes ideal habitat for our most sought after game animal, the whitetail deer. The name of our state refers to this woodland, as Pennsylvania’s (Penn’s Sylvania) literal meaning is Penn’s Woods. We have numerous deer seasons based upon what weapon is legal at a given time. Our first season of the fall is archery followed by muzzleloader then modern rifle and concluded by a late flintlock and archery combination season.
The baiting of wildlife for the purpose of hunting is unlawful in our commonwealth and has been so since the very early conservation laws were passed early last century. Many individuals do try to take this shortcut to harvest their deer regardless of the illegality.

The hunters have been preparing for the upcoming deer season for months. The latest bows and arrows have been purchased and many hours have been spent at the range shooting and fine tuning the tackle. The sporting goods stores have been very busy selling the latest of gadgets to improve the hunter’s success. They have braved the crowds in their attempt to get everything just right. They have the latest camouflage clothing complete with carbon scent blocker lining and of course not only their clothing but also their bodies are freshly washed in the latest scent eliminator. Other preparations have taken place also. Since the early days of August a weekly trip has been made to their hunting area to place corn and salt at the hunting stands. This is the one little secret which is kept private among the members. Not a word of it is to be breathed to anyone. As the apples begin to ripen they too are added to the feed piles. Trail cameras are also added to capture images of the deer attending the bait. With all of the technology available our hunter wants to know what to expect before hunting season arrives. Once he has killed his deer he will have something to brag about to his friends and co-workers. He will tell how he scouted the area and located the trophy buck, spent unending hours patterning him to determine his feeding and bedding areas and how he placed his stand at the exact spot in order to intercept him on his way between the two. Our hunter will portray himself as a real modern day Nimrod! 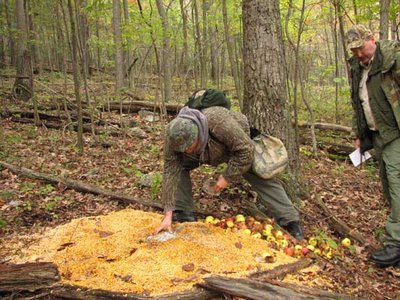 Our hunters are not the only ones busy. The conservation officers have been going about their daily work. Along the way they will on occasion take note of a truck load of corn or apples etc. driving into a lane where they suspicion that no farmer has livestock. Perhaps someone mentions their suspicions of baiting occurring on a neighboring property. 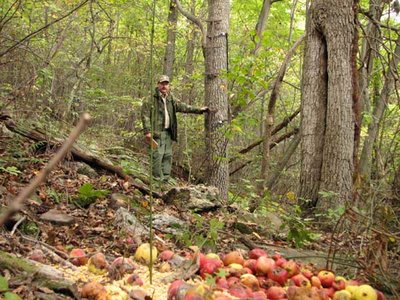 What ever the circumstance it will be investigated. Foot patrols are conducted and evidence is gathered. They too are preparing for the upcoming season.

Opening day our hunters rise from bed early. Perhaps they had a difficult time sleeping while thoughts of large bucks filled their minds. After a quick breakfast our hunters depart for their well prepared ambush spots. They want to arrive early so that the disturbance of their arrival has time to settle before daylight. Perhaps the deer will forget that they are there. 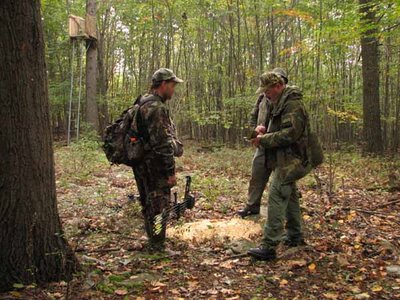 Unknown to them a few hours earlier the officers also left the comfort of their beds, meeting, going over maps and laying out the day’s strategy. One officer will wait a few yards from each hunting stand, well camouflaged. Radios will be turned off to make sure the hunter remains unaware of their presence. Watches are synchronized and the time of the apprehension is decided. The officers arrive at the area and proceed on foot to their appointed spots. A short time after settling in the hunters arrive.

This is the risk many of our less than honorable hunters take each fall in an attempt to beat the system and perhaps get the Whitetail Trophy of a lifetime. Sometimes they do, but sometimes what they get is totally unexpected.

This was a very interesting essay. That's what I love about these blogs. I am always learning new things. Thanks for sharing.

I think it's great when the good guys win for a change. There is nothing worse than a cheater.