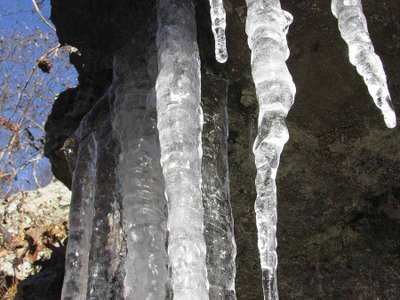 This morning my brother and I traveled to Shenandoah National Park to search for rutting whitetail bucks. Of course while visiting a place so vast and beautiful the wildlife is not the only photo-worthy subjects to be found. As we climbed the mountain on Skyline Drive I noticed the outside thermometer in his truck continued to drop until it read only twenty degrees. Once on the top we noticed that a stiff west wind was blowing. The wind chill was so low that within a few minutes of leaving the shelter of his truck I found my fingers nearly too numb to function the camera. The Blue Ridge Mountains are very high for eastern mountains with the Hawksbill peak topping out at 4051 feet. The temperature at these higher elevations consistently ranges ten or more degrees below that of the valley floor.

At a small rock outcrop we found this formation of icicles. They were gleaming magnificently in the morning sun. 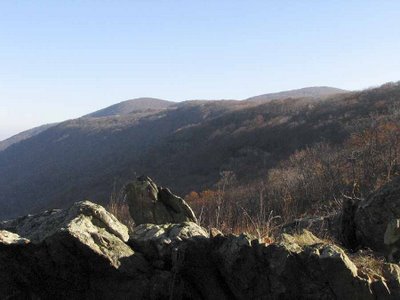 Later I captured this view of the Blue Ridge Mountains at one of the many scenic overlooks.

Oh, the bucks, they will be featured on later postings.

BRRRR, I got cold just reading your description.
Great icicles. You must have had a wonderful time.