Of all the holidays celebrated in rural Pennsylvania, Monday will be the largest. This holiday is always celebrated on the first Monday following Thanksgiving. Schools will close for one to two days. Factories will close for as much as the entire week! Many other businesses will be closed also. The population of our county began to rise Friday and will reach its annual peak by dawn Monday morning.

Hundreds of trucks and SUV’s will be parked by the roadsides. All available camping spots on state forest land will be occupied and blaze orange will be visible in nearly all vehicles moving on our country roads.

What is the cause of all this fervor and celebration? Deer Season!


I now look back at my youth; deer season was a big event for me, it was the time that Dad and Granddad would go out before dawn and oft times return with a mystical, nearly supernatural, mythical creature from the forest, The Buck! The buck would be hung to be admired and later processed into delicious venison. 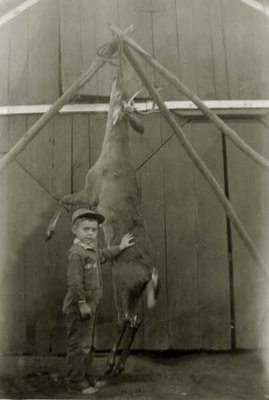 In this photograph I am posing with one of Dad’s bucks around 1960. I remember his story of how he dropped this buck on what had been my Great Grandfathers farm at very long range. I never knew Dad to take a quick shot, and he very seldom missed. Now with his advancing years he has no interest in taking another deer.

I began deer hunting in 1966. My Grandfather and I set out to hunt the woodlot on our family farm. Shortly after dawn the rain began. Soon it was coming in wind driven sheets. I had no rain gear and was soon thoroughly soaked. I sat at the base of a tree I had picked because of the deer trails running near. In the downpour my youthful patients wore thin very quickly and by 8:00 I was wondering just how long I could hold out! A few minutes later I noticed a deer moving in the brush behind me. In a few moments his head and neck appeared from behind the small pines. A BUCK!!!

I could not believe my luck! My little Winchester 38-40 was already up, the front sight settled in the rear notch, I trained the sights on his white throat patch, as if by magic the little rifle cracked. At a mere fifteen yards, I had taken my first deer, a small eight-point! I felt like a king! I had just accomplished a right of passage into manhood. I was now a Deer Hunter!

Soon Granddad and Dad arrived and helped drag my trophy out. With the rain pouring down, they were glad to call it a day and retreat to the warm dry house. I remember the temperature dropping and by evening the first snow of the year was on the ground. 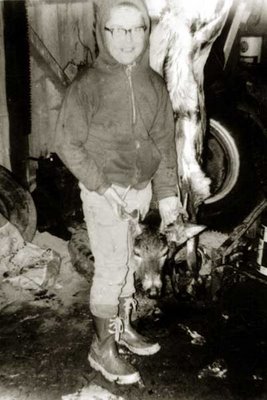 We never thought to photograph my buck until it was nearly too late
That was forty years ago! I can scarcely believe that time has flown so quickly. I have never missed a deer season, never missed opening day and have never gone a year without harvesting a deer. Many things have changed in all those years, but God willing,
I will be there, In the Woods
Silently
Watching and Waiting For

Another great story Salty. Almost makes me feel like I was there.

Amazing that the whole town closes down for the opening of the deer hunting season.

Thanks for commenting on my grandson's drawing. He was so pleased and excited to learn where everyone was from who commented :)

Interesting deer saga. i really hope you can continue your long tradition. I love the pictures from your youth. Keep them coming.

What a great story! Good luck with the deer this year. I have good friends in Shanksville, PA - they have told me how serious deer season is there. Anyway, great pictures and great story.
About my squirrel shots - they were taken early October - not quite summer, but not quite current, either!
Talk to you soon,
Joel

Not all deer hunters are as accurate as you were. We were visiting my Aunt in Wisconsin a couple of years ago, and one person went so far as to put on an orange vest of sorts on his horse!

Look at your young self!

These pictures of you as the young hunter are absolutely priceless.