Reflections of Christmas Past 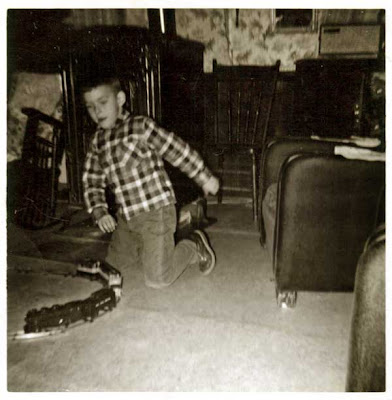 With Christmas just around the corner I must take a moment to reflect on Christmas past. We always had everything we needed growing up on our family farm but excess money was not one of our family luxuries. Each Christmas my brother and I would always find that “perfect present” to wish for, usually from the pages of the Sears or Montgomery Wards catalog. Christmas editions were quickly scooped up and swiftly became dog-eared. A little while later, circles drawn in pencil would appear around those items that we felt we could not live past Christmas without. With full knowledge that we could not possibly get everything hoped for, less than veiled hints would be dropped as to the order of importance of the marked items.

Since we spent our days in school, we would not be home when the packages arrived by US Mail. Many evenings after school were spent in activities of which Santa would not approve!

Dad and Granddad were school bus drivers and would arrive home between 5:30 and 6:00 while my brother and I would be home by 4:30. Mom and Grandma would be busy with the evening milking, giving brother and I chance for some quality snooping! Sometimes we would get lucky and find Santa’s stash. The excitement of seeing those boxes was overwhelming. The temptation to sneak a peek would become irresistible. Quickly a plan to explore the packages without leaving a clue would be formulated. We probably were not as good as we thought, although Mom and Dad never left it show, and neither did we! The challenge was to check everything out before the temptations were wrapped in pretty paper. Once wrapped they were as safe as if they had been put in Fort Knox for there was no way we could duplicate Mom’s wrapping job!

In 1962 the present I could no longer live without was a train set. I first found it in one of those delicious Christmas catalogs. I remember finding it hidden under Mom and Dad’s bed one evening. Now this was “Serious Temptation!” This was such an important present there was no way I could be satisfied with just a peek! Oh how carefully I would open the precious package, noting exactly how each part fit into its spot! I would fit the track together carefully and set the locomotive on it followed by the cars! What an amazing sight to behold! Oh how that little train would wiz around the track! A few minutes of pleasure then it would be time to carefully repack being careful to place each part in its place and finally closing the box!

Contrary to the admonishments of our parents “don’t snoop or you’ll ruin Christmas”. Snooping was just as much a part of Christmas as Christmas Morning! The anticipation, the checking all the popular hiding places, the looking for new places, the thrill of finding, and the “Danger” of getting caught were all very important elements of the Total Christmas Experience! And besides, when we Snooped Successfully, we knew that Christmas Morning would not be disappointing in the LEAST!

Wonderful memories Salty. I remember snooping only once when I was about 8years old. I wanted a parakeet for Christmas and I looked in my folks closet and there was a bird cage all ready for my cherished bird. I felt so guilty that I could barely act surprised when I opened the package. I'm not sure if the folks knew what I had done or not. I do know that I never snooped again.
If I had had siblings around things probably would have been different.

I love these stories. Yes snooping was part of Christmas when I was a kid too. Money was tight for us too and we didn't get a lot for Christmas. For me it wasn't so much looking for the present but more feeling and shaking the things under the tree.

I saw my train set before Christmas too! But, I did not open it until Christmas. Great story and picture.

I saw my "Game Boy" by accident one year as well.