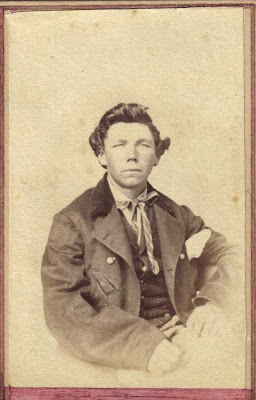 My wife and I have been working on collecting old family photographs for over two years now. We have contacted many extended family members and have been very pleased with their willingness to share. We have scanned hundreds of old photos and attempted to identify as many of the individuals as possible. As a reward for their help we always give a CD of our collection. Finding photographs of people with no way of identifying them is very common. Genealogical data bases are very helpful with names, dates and relationships but they cannot positively identify old photographs

At times a photograph will lead one on an interesting mystery; such is the story of this photo. We located it in a small leather bound album from the collection of one of my wife’s aunts. The album contained twenty five photographs mostly taken by studios in Chambersburg, Shippensburg, and Greencastle Pennsylvania. No one had taken the time to record any information on the page provided. 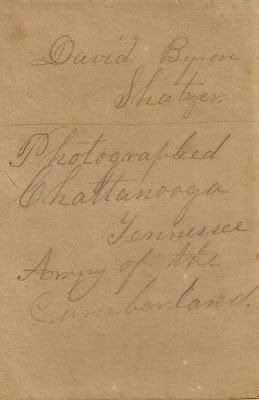 This one photograph though was identified by the following writing on the back side. David Byron Shatzer, photographed Chattanooga Tennessee, Army of the Cumberland.

A search of Civil War Military records revealed that he enlisted as a private August 27th 1861 at Chambersburg Pa. and was discharged August 13th 1865 at Philadelphia. He was twenty six years old 5’ 8 ½“in height at enlistment. His residence is listed as Franklin County Pa. It is also noted that he reenlisted at Portsmouth Va. November 18th 1863. 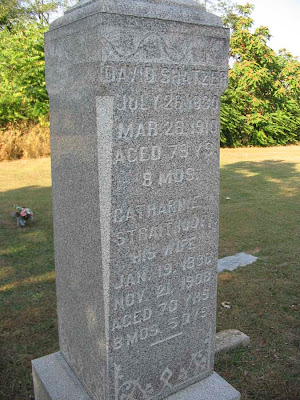 One day while my wife and I were searching for her ancestors in the Cashtown Cemetery, near Chambersburg Pa., I happened upon his grave. From this chance encounter we learned that he was born July 26th 1830 and passed away March 26th 1910.

We have not been able to establish any family ties to David and have no idea of how his photograph came to be among our family keepsakes. If anyone who views this happens to have any additional information I can be contacted at chesyrock@hotmail.com

Interesting story and an amazing chance encounter. I love the geneology angle. We had to do so much of the sluthing with my husbands side of the family. Nobody wrote anything on so many of the pictures. Very difficult to uncover.

Neat story! I love to look at old pictures like this.

You know you can add your e-mail to your profile info.