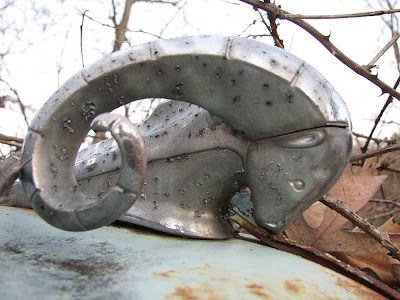 The Ram seems poised to push his way to freedom through the brush and vines that have him trapped as time and the elements erases his very existence.

I photographed this Ram while taking a stroll this evening on a neighboring property. It has been many years since I seen this car but it does hold special memories from my youth. Paul, who is my Dad’s first cousin, took an interest in my brother and me when we were still quite young. We shared some similar interest and Paul was eager to share. We traveled with him in this car to many local jam sessions where everyone would bring their musical instrument and play and sing until the women folk would bring out the refreshment. Homemade ice cream, watermelon, and many other assorted goodies would be served. Afterwards some more music and lots of visiting would complete the day. The music consisted mostly of old Country tunes seldom heard today like The Wabash Cannonball, The Old Age Pension Check, and The Great Speckled Bird.... Songs that truly spoke of country living.

Paul also introduced us to his style of buck hunting. Paul was a very proficient “still hunter” and took us a few times to the mountain and taught us the basics of his technique. It was from him that I learned how to “hunt” deer and not just go and sit hoping that a buck would pass. Paul’s old Dodge carried us on all of those early outings. I remember the floorboards rusting out and when he would cross the creek the water would come in. We quickly learned that when crossing the creek that it was a good idea to lift our feet!

I think I need to learn how to truly "Hunt" instead of just waiting for something to pass by;)

Finding where the game's at is the difficult part.

Great shot that evoked many memories for you. I like the angle that really does make the ram look like he's breaking out.
Sounds like your jam sessions were really special too. It all goes back to family, how wonderful.

Wonderful memories. When I was younger, any time my family got together some would drag out the guitars and the harmonicas and we would sing and play for hours.

Part of your post brought tears to my eyes. My mom used to sing "The
Great Speckled Bird"

Wow what a wonderful post - lucky you to have experienced what sounds like and idyllic childhood. Thank you so much for sharing it with us.

The photo is fantastic.

There is an old junk year around here I shot last fall. It is full of rather old and unique vehicles, many with very unique hood ordainments. I am fairly certain I saw this one as well. I have actually considered putting together a calendar of old hood ordainments! My favorite however is the one I posted on November 17th. http://deltadailyphoto.blogspot.com/2006/11/traveler.html