Granddad told the story of the death of Elsie Fike. The tragedy happened on a hot summer day many years ago at this very same creek fording. Elsie and her husband had dealt with a neighbor for the breeding of their mare. The mare had recently delivered so Elsie, with her horse and buggy went to the neighbor’s farm to settled their account. A thundershower passed through upstream while she was away. On her return the creek fording was flooded but she attempted to cross. Elsie along with her mare and buggy were swept away. A search party of neighbors was gathered and her body was found downstream. The mare was found standing on the creek bank about a half mile downstream. As my brother and I were growing up this story was told to us many many times in hopes of instilling in us due respect for the power of the creek.


Friday, for whatever reason with the creek at flood stage, our neighbor drove his truck straight into the raging torrent. He said he had no idea that it was so deep. Once the truck stopped he found he could not open the driver’s door. His decided to escape via the window. Not wanting to go out headfirst into the water he instead went feet first. He found this was not an easy maneuver at his age and the truck cab was filling quickly. He recounted that his escape took him about twenty minutes and the cab was full of water by that time. His window of opportunity was quite narrow. The water was very cold, only a couple of degrees above freezing and hyperthermia will incapacitate us in a few minutes at these temperatures. After wriggling out of the truck he made his way to shore and headed to his home about three quarters of a mile away. Never once during his escape did he think to try the passenger door. The current was pressing against the drivers door effectively blocking it from opening, the downstream passenger’s door would have opened easily.

These photos were taken Saturday morning after the water had receded considerably. 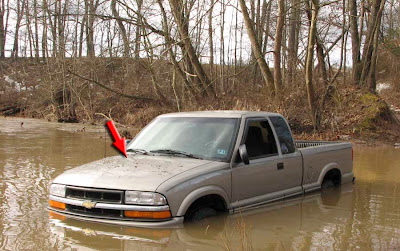 Note the arrow pointing out the high water mark on the hood. The water was beginning to recede when the incident occurred making this the high-water point at which the vehicle came to rest. 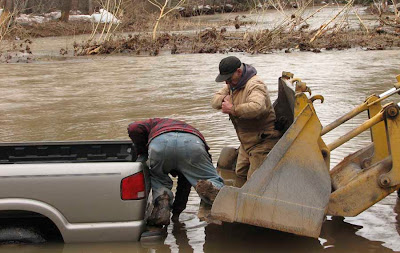 Neighbors came to the rescue of the truck. A high lift belonging to the township road department operated by one of our supervisors aided in the removal. 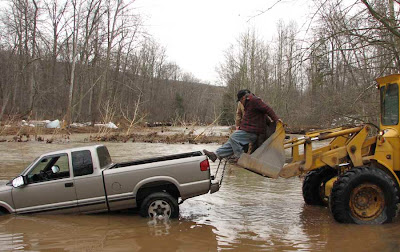 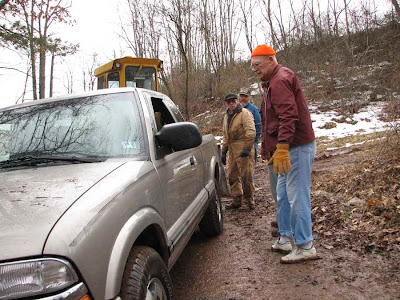 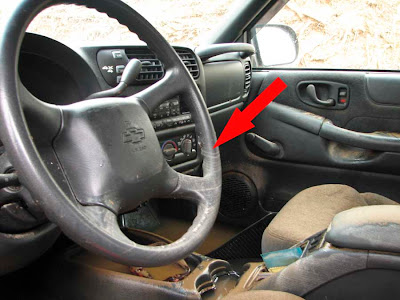 Note the high water mark on the steering

This is the same creek featured in my October 25th post “Autumn Creek and in the Walking on Water series posted this past February. Our society has built infrastructure to protect us from nature but when one travels the back roads they must be aware of the hazards present and give due respect to the powers of nature. Our neighbor’s moment of carelessness cost him his truck and very nearly cost him his life.

Whew, what a extrodinary story. That man was so fortunate to get out alive, In the heat of the moment sometimes our brains don't work as they should. This is a good lesson for all of us to not take risks that involve lives.
Great document pictures.

Should have had a LAND ROVER...
So glad he made it out..

Interesting post. I read it twice and think the man was fortunate to escape.