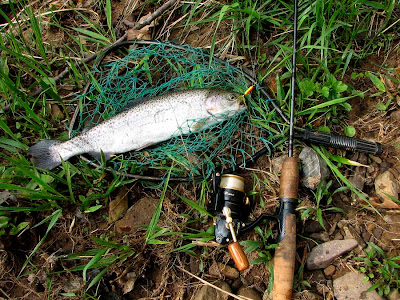 For many outdoorsmen in the Keystone State trout fishing and spring go hand in hand. Many of our streams have become too warm to support trout year around. This has been caused in part by the removal of shade trees along our streams.
A stream meandering through a green pasture, while beautiful, may not be a healthy stream. For a stream to sustain a healthy fish population it needs shade and decaying vegetation to feed the microorganisms and invertebrates which in turn support the higher forms of life such as fish. Cool water fish such as trout require the lower water temperatures provided by the shade.
Pennsylvania trout fishing is in large part a put & take fishery. The Pennsylvania Fish and Boat Commission rear some four million trout annually. The recreational economic impact of this fishery is estimated at nearly $500 million per year.
Trout fishing is big business in Pennsylvania. It is also a pleasant and relaxing way to spend the day.
Posted by Coy Hill at 4/24/2007 11:37:00 AM

Email ThisBlogThis!Share to TwitterShare to FacebookShare to Pinterest
Labels: fishing

Nice photo. Looks like this photo should be in Field & Stream magazine.