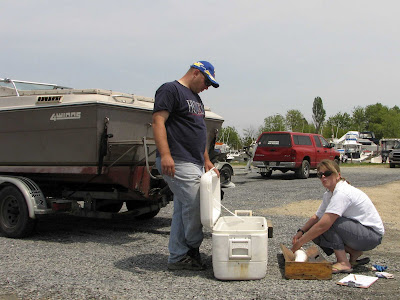 At the end of my latest trip for Striped Bass we were greeted at the marina by a Maryland Department of Natural Resources biologist. She politely ask us to participate in a survey and also checked our fish. The fish examination included measuring, sexing, and checking as to whether the fish had spawned prior to being caught. She also removed a scale which will be used to determine the fish’s age.

Management of the striper population is always a contentions issue. Maryland DNR is constantly trying to do a balancing act between the biological and political issues surrounding this fishery. Management of the striper stocks is further compounded by the fact that they are migratory fish. Their annual migration carries them through the coastal waters of many states throughout the year. The stripers who spawn in the Maryland waters of the Chesapeake will travel through Virginia to the Atlantic, then up the coast to summer along New England before returning to the Chesapeake this fall and then on to their wintering grounds off the coast of North Carolina.

Much good data is needed to assist fisheries managers in making these important decisions and it was with pleasure that my fishing partner and I participated in this survey.
Posted by Coy Hill at 5/16/2007 06:49:00 PM

That's cool that you got to participate.