Aitch, the village that Was 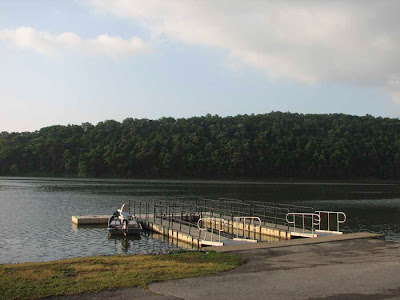 What would normally be considered a rude comment has a different meaning in the Raystown Lake area of Pennsylvania. Aitch (pronounced H) once was a village but now is a launching area. This photo was taken in the early morning before the crowd of boats and jet skis arrived. The village of Aitch lies under the water of this small cove.

The 8,000+ acre Raystown Lake, created by the US Army Corps of Engineers as a flood control project in the 1970’s displaced many families. What once was a rural agricultural valley is now a playground for people from all walks of life.
Posted by Coy Hill at 6/14/2007 05:46:00 PM

This reminds me of Tennessee, where the TVA displaced thousands in the name of rural electrification and recreation. And now TVA is selling parcels of land that it condemned decades ago to developers, who build McMansions for out-of-staters. Creates a lot of bad blood!

Salty Dawg, They also had to move some graves to a new location when they put the dam in. Do you ever go swimming at Seven Points? My parents have some old photos of when we lived there. I go see my parents all the time but haven't been the lake to swim for sometime. The water is always so clear there compared to the swimming areas around where I live now.

P.S. Have you gotten any photo's at the lookout?

...I just read that there is a legend of a "Raystown Ray". A mythical creature such as "Nessi". Of course, the only Photos are from far away and blurring ;)

They should come up with a better legend than that, one that has something to do with the town that's under that lake. I'm sure there could be some good ones.

I wonder if there is a "Raystown Ray" alliance such as the "Nessi Aliance"? (Napoleon) I couldn't resist.

Its nice to have a lovely lake but I hate to see people displaced because of it.

Chad, I had to come back here to see the comments since I lived at Raystown before they made the dam. That's my hometown and I have done some history research on my family. Anyway, I just wanted to answer you question. I can assure you there is No Nessi. Someone started that as a joke and since it is a man made lake I don't think that would be possible.

Raystown was named after a guy whose name was Ray when he first settled there. He decided to call his town Rays..Town and put the two together. Huntingdon is more known for the Indian Standing Stone in the middle of town and a famous story about a Mcquire girl who was chased by the Indians and grabbed a hold of a cow's tail to get away from them and she did.

One of our past presidents has fished there. Jimmy Carter has went fishing several times at Spruce Creek. For a small town of Huntingdon that was a big deal.