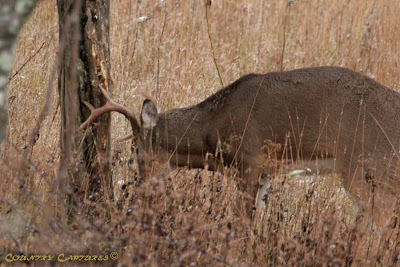 In this shot I captured a dandy buck making a “Buck Rub”
Whitetail bucks rub trees with their antlers for different reasons. As I am not a deer I will not pretend to fully understand their motivation.

In late summer and early autumn bucks will rub trees as the velvet sheds from their antlers. As the rut approaches, the intensity of the rubbing increases with bucks doing mock battle with small trees. During this time the buck’s neck will thicken significantly as he builds strength for the battles to come. Most battles however are avoided, being settled by displays of dominance instead.

The buck in this photo is doing precisely this. Moments before I took this photo he had successfully stared down an opponent and followed up the encounter with the attack on this tree as the other buck slowly moved off watching his every move.

It is good for the deer that pitched battles are not that common for their headgear makes for a formidable weapon. Sometimes they will lock antlers; being unable to separate, a slow death will follow. Other times and I believe far more common a buck will be speared by his opponent’s antlers and this too can result in death.
Posted by Coy Hill at 12/04/2007 06:31:00 PM

Thanks for the rub lesson, Salty. Great shot! I hope you know I was kidding in my last comment about winter fur.

Well I misread the title and thought it said Back rub. LOL Buck rub is a very interesting action. Great shot and thanks for the information.

It good to see how nature intended conflicts to be fought out... if only we could do the same... now then Salty where's that big tree I noticed.

Oh I'm so jealous!! Oh course we dont have the big deer down here in South Ga. like yall do but how neat to watch them when they are marking! One year I was working with a quadraplegic fella. It was his first year hunting since his accident. He had a hydraulic stand set up in the corner of a 25 acre food plot. We counted over 30 deer in that field during the rut at ONE time. We got to see the best show ever! I have never heard so much grunting, the chasing & displays of dominance was incredible! We have never experinced anything like it since. And we talk about it every hunting season!

WOW, your camera captured what I have always wanted to witness.
Awesoem shot and Super information

I posted about you & your brother. Hope I did you justice!!

Now I know why I didn't see any signs last week - THEY'RE RUBBING NOW!!

It was great to see you guys - I consider you family!!

That must have been a sight to see! Really nice picture.

What a nice post Salty, great photo and interesting info too.