Deer Hunting, a Dark Side 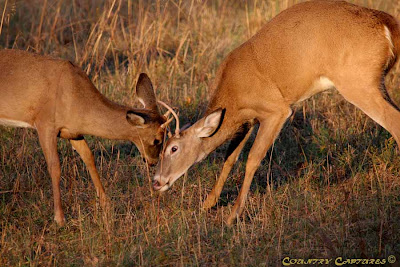 Willard mentioned in his previous comment that I should post about a story that appeared in Pennsylvania Game News, November 2006 entitled Mike’s Backyard Bruiser.

The following is a much abbreviated version of the story. Early on in the article we are introduced to Mike as a “life long Pennsylvania gentleman and a fine role model of what a sportsman should be”. Also it is stated that “he harbors a deep love and respect for both the animals he pursues and the environment they inhabit”. The story takes place in Mike’s backyard in southeastern Pa where he has a tree stand.

About 8:00 a.m. Mike shot an arrow into a large buck’s rib cage. The buck moved away about 50 yards and lay down. During the day Mike attempted a number of times to approach the deer close enough for a finishing shot but the buck would move off a little each time only to lay down again. At one point he did attempt a shot only to miss and the buck walked away into some brush and again lay down. Upon returning the next morning he found the deer dead where he had left it the preceding evening.

To be entirely fair to the hunter, once the deer was injured he had no legal way of finishing the job other than with a bow as archery gear was the only allowable weapon during this season.

The part that really gripes me about this article is the last paragraph.

“The trophy now hangs over Mike’s mantle – a vivid reminder of one awesome day spent interactively immersed in God’s creation and a culmination of many wonderful years spent afield in pursuit of the big one”.

Speaking as a hunter, to be involved in a situation such as described in this article would be a Nightmare to me!

I was not born with the code of ethics that I hunt by nor was I taught it by any one particular person; rather it has developed over four decades of hunting and living closely with wildlife. I have killed deer; I do not know how many as I have not kept count. Not only have I killed while hunting but my work in conservation required mercy killing many times over the years.

To me there is no joy in bringing suffering to any creature. I accept death; for in death there is life. Anyone who enjoys a steak, hamburger, pork chop or even a hotdog must accept that an animal was required to die to provide that meal. I see little difference in harvesting a wild animal for food than killing a domestic animal reared by humans for that purpose. In reality the wild animal in many cases actually lived a better life being free up to the time of being harvested. The duty of the hunter is to accomplish his goal as quickly and painlessly as possible and not take joy in any suffering they happen to inflict when things go wrong.
The above photo is of two young bucks sparring, not of a pitched battle. After a good tussle the two “boys” made up by licking
Ps. Abe, I promise to digress from the hunting issues in my next post and return to unspoiled wildlife and rural photos.
Posted by Coy Hill at 12/06/2007 07:18:00 PM

That is a nasty story! Yeah God would be proud wouldnt He! Cute shot of those 2 bucks! You should have posted one of them making up too!

I agree that would have been a nightmare.

We need more in the conservation business as you are. Your heart and ethics help me understand the whole issue of hunting. Thanks Salty for your words and illustrative photographs.

Thanks for posting that.

It is sad that it happened and equally sad that the editorial staff of Game News accepted the story.

Another way of looking at it would be that this is one of the few cases that the truth was actually told, but it was not something to be proud of as the story portrayed it.

I really wish more hunters felt like you do.

I also agree that for me this would have been a nightmare. I am having a terrible inner struggle with myself over the plight of horses in this country at the moment and that is so difficult to deal with, I often wonder if I am being too sensitive, but it is something that I am so passionate about. I am not a vegetarian and often wonder if that makes me a hypocrit. My horses are my life and to think of them ending up on a truck bound for Mexico or Canada for slaughter to end up on some Frenchman's dinner table is too terrible. It is not so much the fact that some people eat horsemeat, it is the way that they are treated, transported and slaughtered (very inhumane) that disturbs me.

I also apologise to Abe, I know he feels the same way but if I can just educate one person on what goes on in the dark side of the horse industry it will be worth it.

Sorry I wanted to add, the picture of the deer sparing in this post reminds me of the pictures of my horses (stud colts) doing the same thing while they are growing up. At the time it looks dreadful but it is all part of their growing up and is a game. I love watching them interacting, can sit in the field all day watching my horses.