Up Up and Away 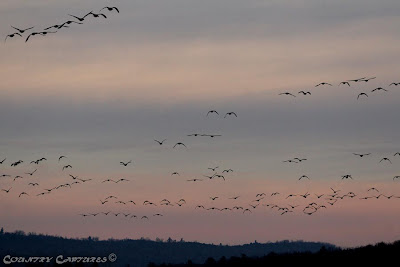 I wonder what in our environment has changed to cause some geese to become non-migratory. Could it be as Abe stated the increase in wet lands created by new building laws or could it be the geese are much smarter than we people give them credit?

Could it be that a lazy goose decided not to migrate, found how good life was without the long flight and then told his high flying friend about it when they returned from the tundra. Liking what they heard a few more decide to try this new lazy lifestyle. As the years passed the lazy geese’s numbers grew until they now outnumber the high flyers.

Well I certainly don’t have the answer to this one and I don’t think we can blame it on global warming. If GW was the cause of the geese changing their nesting grounds then reason would indicate that they would nest further north not south. I like the lazy goose theory. The resident geese are a much large bird than the migratory. Just take a look at our own species; athletes are usually much lighter than sedentary folks. For now, until someone proves me wrong; I’ll just stick with my fat lazy goose theory :)
What do you think?
Posted by Coy Hill at 12/16/2007 03:22:00 PM

I like your theory Salty, laze Geese.
I also like the photo too its a brill one and the pinkish sky is magnifico.

I love your picture! I never seem to have my camera when the geese fly over.

I love your new header, Salty. Merry Christmas to you and yours!!!

Wow, I love the new header Salty. And looking back through your posts you have really come along with very professional looking photos and a great conservation blog. I loved the story of the light hunters. Didn't realize you were a agent.

I think there are so many geese that there is no advantage for them going south and perhaps the food is as plentiful in the winter places. Just a guess.

Fat Geese.. just ready for Christmas... with Roast Spuds and all the trimmings.. ha!

Wow....that's a LOT of Geese! They look great on that multicolored background of sky!

I LOVE the lazy goose theory!

I think I'm a bit of a "lazy goose" sometimes myself!