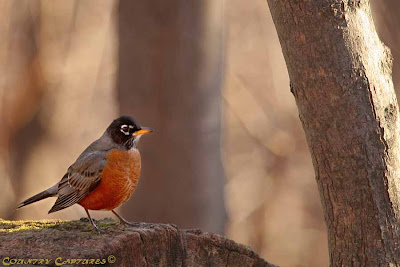 Monday morning I once again headed out before dawn in search of images. The stars were shining brightly so there was no hope for a stunning sunrise. I decided to drive the top of nearby Sidling Hill Mountain is search of wildlife. My first two encounters ended in failure, first with a ruffed grouse and then with a red-tailed hawk. In each situation, try as I might, capturing a good image was not to be.

Some time after the sunrise I began noticing many birds flying low across the road and landing nearby. They were Robins! No, spring has not come to Pennsylvania, but this was an absolutely huge flock feeding busily in the woodland! After pulling off the road I eased into a concentration of them with my Canon 30D and 100-400 lens.

This was an amazing experience! The robins were moving across the forest floor by the hundreds. Robins were everywhere; hopping, flying, scratching, landing, calling and all were eating. It was like one huge noisy machine comprised of thousands upon thousands of small independent parts moving through the woods harvesting all edible morsels in its path.

What a pleasing sight that must have been.

They were swarming in Tina's pecan trees and we thought they were black birds until we downloaded the pictures I took. I didn't get one as good as yours tho.

So why were they there? Still migrating?

Irene,
Yes it was a migrating flock.

This is the latest I have ever encountered a large flock of robins. There were so many birds that they scarcely paid any attention to me with many lighting within only a few feet away.

You have some amazing pictures and an amazing talent! What a wonderful display of pictures! Lovely talent!

Fantastic capture of the Robin. It almost looks like a greeting card. The other day we had about 10 in our backyard. I think they were getting a bit tipsy on the neighbors pyracantha berries. What a commotion they made, of course by the time I got my camera out they had moved on to who knows where.

WOW. Four miles of robins must've been spectacular. Even a common bird can hold some surprises!