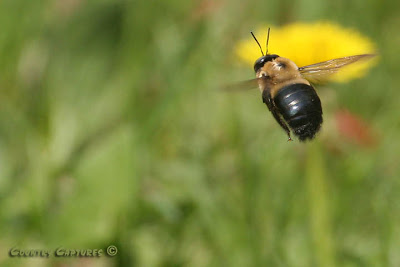 Male Carpenter Bees are notorious for staking out a territory and chasing off all intruders. Any insect that enters will be rapidly pursued. Once the intruder has left the area the Carpenter Bee will return to hover, sometimes stopping in mid air watching for the next invader.

This Carpenter Bee was quite the busy boy when I photographed him. The wind was blowing briskly and flower petals from my cardinal bush were blowing through his territory. This little guy would mistake them for another insect, chasing them to the ground.
I was trying to get a head-on shot but with a thunder storm approaching, I had to cut my photo session short and be satisfied with what I had. This image was captured with the Canon 100mm-400mm L lens
Posted by Coy Hill at 4/30/2008 08:19:00 PM

We have those critters here, MAN saw dust everywhere, quite industrious...

My goodness, that's an impressive shot Salty. I didn't know that that bee was so territorial. I love what I learn from your blog.

Great capture and information.. I smiled at the thought of it chasing the petals.

Salty: Great photo, I like the way you caught him in mid flight. It was nice of him to hover in place. I was chasing some big bumble bees around the buckeye tree and they weren't happy.

That is a great capture.
I also loved yesterdays butterfly and lilac.

You should be VERY satisfied with this photo. Great Job

You are so brave to capture this shot I'll run away if I do come that close with this fella ;)

I have these by the hundreds every year, burrowing into the timber work of my pole barn. I get quite worried sometimes that they are going to eventually bore so many holes and tunnels in the wood that the whole thing will fall down LOL. Great shsot, these guys are zippy.