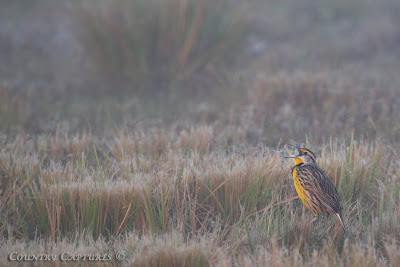 I recently read an article in the Pennsylvania Game News describing some of the issues surrounding our grassland bird species of which the Eastern Meadow Lark is one.

The article stated that many grassland species have become much rarer with some having suffered eighty percent population declines. The article went on to mention intensive mowing/haying and pasturing as being part of the problem since these birds require the grass to stand throughout their nesting season.

I have observed the occasional Meadow Lark but not until my Florida trip did I have the occasion to capture a photograph. While driving back Joe Overstreet road one foggy morning I spied this pretty little songster singing in a pasture field.

Notice the height of the grass, this field certainly does not suffer from over grazing as do many of the pastures in my home area.
Posted by Coy Hill at 1/23/2009 06:32:00 PM

Gosh Salty, I've been away and you've posted so many beautiful shots. I know I've told you before but I also love learning all the tidbits you add about the birds that you photograph. The egret and stork are outstanding. I've never even heard of a scaup before....where have I been?

Congrats on the article! I need to get out and do more photography, but the pain is back and I don't get out much. I did take my little boy to the movies tonight. A real treat for both of us.

A superb capture. Odd how one never thinks of larks singing on the ground. One usually hears them trilling their hearts out high in the sky.

Like the composition on this image Coy with the bird in the lower left. The meadowlarks are reliable at Overstreet and great fun to photograph when singing. Nice job.

That's a beautiful bird!!
It is sad when bird or other species populations decline due to human doing (way too often)

Nice capture of the Meadowlark in full song! They have one of my favorite songs along with their cousin the Red-winged Blackbird. He looks like he is singing his little heart out.

What a beautiful photo! I have seen only one Meadowlark in my lifetime. I would love to have the chance to take a photo like this! Also, the photo of the eagle is perfect.

I grew up with meadowlarks, but don't have them here. I miss their voice. I wonder if they are declining where I came from.

Good composition and photos Salty, it is a pretty bird.