Too much to Swallow: Wood Stork 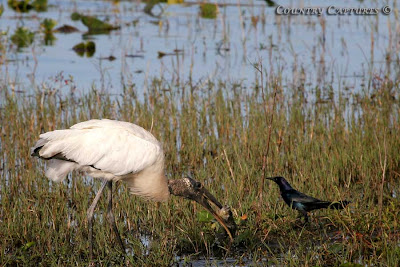 The Stork slowly stalked the wetland until suddenly, with a quick stab of its beak it secured a fish. For the next ten to fifteen minutes the Stork tried unsuccessfully to swallow the fish whole. Finally the Stork left its catch behind as it fled from the roar of a passing air boat.

I did not see the Stork return to claim its catch, but with the multitude of birds foraging in the wetland it could not have been long before someone lay claim to the prize.

This is a real good one, I only see the Wood Stork skimming the water.

My parents used to say that my eyes were bigger than my tummy,guess that's the case here.
Blessings,Ruth

Another great action shot Coy. I am surised it did not manage to eat it but I can bet n the fact it did not lay there long before it became someone elses dinner.

I like how that crow is hanging around for some scraps! Great photo!

Salty: Neat capture of the Stork, certainly something we never see up North. That Grackle does come up this way.