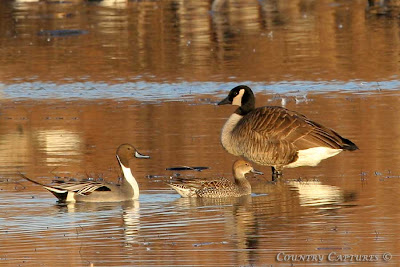 When I first opened the car door in Blackwater National Wildlife Refuge I could hardly believe my ears; the clamor of thousands of nearby honking geese was tremendous!

Wildlife Drive, a four mile one way road runs through the refuge following the top of a dike separating freshwater impoundments from tidal marsh. This road allows one to get reasonably close to the waterfowl with little physical effort. Of course the waterfowl here is accustomed to people and automobiles along this route and are not alarmed by ones presence. During our visit a portion of Wildlife Drive was closed for repairs but with two thirds open there was plenty to see and photograph.

After the Eagle from my previous post had left it perch I began to focus on the Canada Geese in a fresh water impoundment. Only then did a notice a pair of graceful little Northern Pintails swimming among their larger cousins.

Another “first” as this was my first ever photo-encounter Northern Pintails. Our visit to Blackwater provided me with a number of “first” which I will be sharing in upcoming post.

What great luck you had Coy!! This seems like an ideal place to do some bird photography.

I love all of those duckies and geese. I have tried several times to get a nice shot of the geese. When I was at my mom's on the mainland I did not capture any that I was very happy with. Your image is terrific.. :) :) I love when they fly overhead and honk.. I think that is just the best... :) :)

wooow. A beautiful picture. The light complements the duck color like crazy... This is awesome... And a tick for you isn't it?'' Great job...

You must have got some really nice shots.

Salty: That is a wonderful duck. I tend to see only mallards over here.

Great looking pintails, Salty! Wonder what they are talking about?

The Northern Pintail is so elegant looking. We never know what we are going to see when we stop.