Sparky, The Hand Me Around Dog 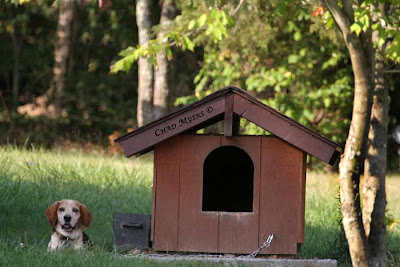 Sparky was born about fifteen years ago to a pair of beagles who purportedly were good rabbit dogs. His master named him Sparky, a name that has stuck with him throughout the years.

When Sparky was a couple of years old my uncle was looking for a rabbit dog and acquired him. After a couple of seasons of hunting rabbits without Sparky taking one bunny track, Herman was ready to try a new dog and passed him on the my parents.

When my elderly beagle Buck passed in January of ’03 dad suggested that I take Sparky for he really didn’t do much other than feed him. Soon we had ‘Ole Sparky totally spoiled. Any time we stepped outdoors Sparky would watch us intently, if we so much as moved in his direction he was at the end of his chain barking and bawling hoping for a treat and a pat on the head.

As the years took their toll his eyes began to glaze, his vision became bad and his hearing worse but he still welcomed me home each evening with his beautiful beagle bellows. Now the end has come and we miss our friend.

Salty, I am so sorry to hear of you loss. Growing up I had a beagle for many years, he was my best friend and the one I told everything to. He eventually got cancer and I had to have him put to sleep, it was the harderst thing I have ever done. They really become part of the family.

Your post brings tears to my eyes. Our pets are our babies. They are as much a part of the family as anyone. Our oldest cat is getting in pretty bad shape and it about breaks my heart to think of having to put him down. Please know I am truly sorry for your loss.

So sorry to hear of your loss of your good friend. Amazing how we hold these furry creatures so close to our hearts. He's in a good place now and I bet he's chasing rabbits to his heart's content! My heart goes out to you and your family.

I am so sorry to hear this Coy. He lived to a ripe old age though and I am sure you both had many good times together, but it is tough loosing a friend.

Dog's age quicker than humans, but that has it reversed: a good dog keeps us young at heart.

I am sorry about the loss of your 'friend'....Anyone who has loved and lost a pet knows what you're going through...Michelle..

Tears are streaming here....I'm so sorry Salty. I'm glad you have wonderful memories of him :)

I'm sorry to hear about the loss of your dear friend, I bet Sparky was like a family member. Keep remembering those happy times you had :)

So sorry for the loss of your little friend :( I know how sad it can be when that happens. Be extra nice to yourselves for a couple of weeks.

I'm sorry to hear of you loss, Salty. It's very hard to lose a friend.

I'm so sorry Salty. It's never easy when our furry friends leave us. They truly are a part of the family unit.
I'm sure Sparky will be waiting patiently by the Rainbow Bridge for you.
Take Care

Awwwwww! What a sweet tribute to your very special friend. I'm so sorry for your loss Salty.

I am very sorry about Sparky. He was good friend and companion.

A wonderful tribute to a loyal friend. I am sorry for your loss.

Oh how sad. I am sorry you lost him. It is not easy. Big hug.

So sorry to hear of your loss. It sure is a hard thing but it sounds like he had so much fun and a wonderful happy life. Take care. Aloha, Renee :)

I'm so sorry. I have said goodbye to many best friends and I know how it hurts - hugs to you.

Hi,
Absolutely love your site. Would love for you to register and be a part our community.
Cagora
- Where Passions become Profitable
P.S. I back linked you

Awww. What a great dog.

I'm sorry to read about your pal Sparky passing. When they are part of the family the sadness is very real.

I'm sorry to hear about your buddy, Sparky. A wonderful pet indeed and I am sure he will be truly missed.
Your post is a very nice tribute to this special friend.

Awwww. I just saw your post now. I knew he was ailing, but it is still sad to see the end come. He was a good dog :)

I'm so sorry to learn of the loss of your dear furry friend, Sparky. I'm sure your life is better because of him and I know you will miss him. Perhaps Sparky is now romping with my Onyx and waiting for us at the Rainbow Bridge.

Sparky will be missed.

Thanks for the plug, Dad ;)