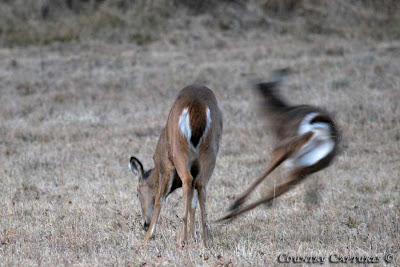 One image does not tell the entire story

This image of one deer casually grazing while the other falls to its side was not as it appears! 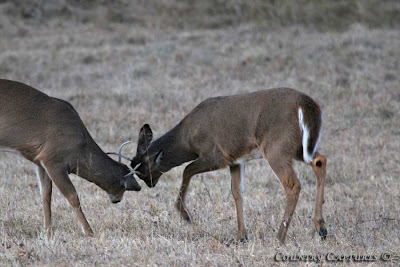 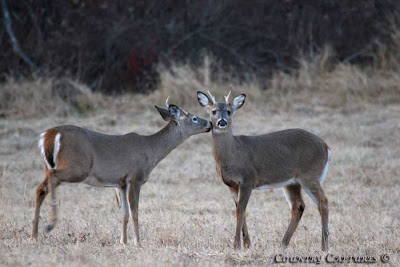 During one of the sparring engagements the buck to the left in the first image managed to hook his antler into his partner. What had been a relatively slow-motion exercise became one of quick maneuver as his opponent attempted to separate and regain his balance.

After a couple of minutes to regain their composure the two friends continued their light-hearted combat.

Now that first photo is very unique. The photos that follow are equally nice.

Whew...fascinating. What a capture Salty. Its a one of a kind.

Good pictures and info. I didn't know they would be friendly like that during sparring.

Wonderful wildlife photos. The first one is awesome!

So pictures DO lie!! :) A great capture of the moment Coy.

I'm so glad you told 'the rest of the story'! When I see two bucks sparring - and then grooming - I just always think they must be brothers.
What a neat post! I miss seeing the deer lately - I'm gearing up for spring fawns...can't wait! Beautiful captures!

Neat shots Coy, that had to be fun to watch.

I live in the city and don't see lovely sights such as this. I love seeing the deer in action. Thank you!

That first photo is really neat. It almost looks like one deer and a part of its essence fled.

The first image is amazing. Great capture. Nice sequence of shots. Glad you explained since I could not figure out what had happened. :) :)

They sure play rough, don't they?

A wonderful post Salty! I LOVE it that they paused to groom each other...how sweet!

What a fanatastic shot! Great capture! I loved reading this story. They remind me of my dogs. One takes great pleasure in bowling the other over, then she just moseys away to sniff good stuff while the other recuperates. It's so nice to watch them having fun.