Waiting for the Robin Snow 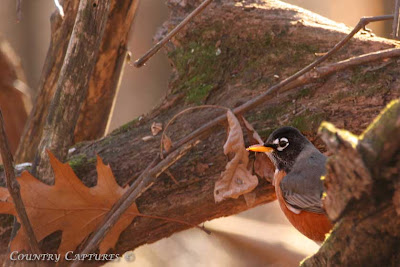 It’s not uncommon to get some snow after the Robins return in fact according to the old timers we must.

My grandmother had a number of named snows; the Cabbage Snow, the Fuzzy Snow, and of course The Robin Snow. She had more named snows but at the moment I cannot remember them. I think the Cabbage Snow arrived after grandma had started cabbage seeds indoors, the Fuzzy Snow was a wet spring snow that clung to everything it touched and the Robin Snow always came after the return of the robins.

Absolutely! We in PA know from experience that March often brings the biggest snowfall of the winter. Once, when I was still working, we were snowed in and had to feed over 800 kiddos!

The only one I would like would be "No Snow". :) You can see I prefer the warmer climates. :) Whenever I used to visit there, I would make sure that it was from March onwards.

I just posted some robins on my birds blog. They are back here in great numbers. Almost all of them have been cleaning up under the crabapple trees. The starlings came earlier and stripped the trees but dropped a lot of stuff that the robins got.

I never heard the "robin snow" before but it has already snowed here several times and the robins were sitting around all puffed up trying to stay warm.

Amen. And what a nice photo of the Robin. It has great composition, what with the moss on the bark, and the golden leaf. Nice job!

Salty: I'm glad they are back and I have seen them on every walk. It has turned cold today but at least we aren't getting what Minnesota got hit with.

Lovely shot of the Robin!

I really am ready to wish the snow farewell - but it just keeps coming back! And it's amazing that there are so many robins! You've captured this one beautifully!
-Beachy

Thanks for the "robin snow" post, Coy! I've been looking for references to it for a post on my own blog and I linked to yours as "proof" that others have heard of it. Hope that's OK and that it brings you more visitors and business!