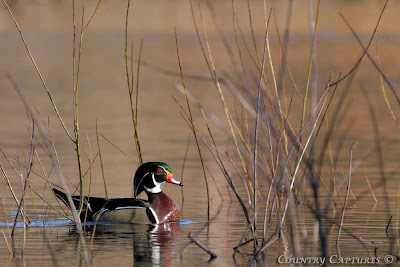 When trying to capture good portraits of wildlife nothing can take the place of getting close. Wood Ducks have been particularly challenging for me as our woodies know all too well that humans mean trouble.

Visiting the wetland Saturday morning I concealed myself reasonably well by wearing camo and hiding in the surrounding vegetation. After a wait of over an hour a pair of wood ducks swam rapidly across the small opening while a cloud passed across the sun. Disappointed but not discouraged I continued my wait and was soon rewarded when this lone drake swam into the open less than twenty yards away providing me with my best wood duck portrait to date. 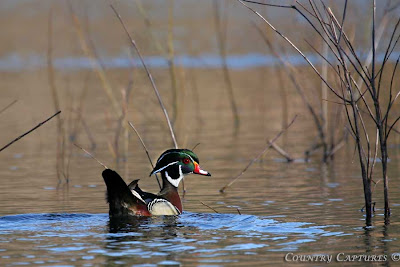 I had only time to fire a few frames until he noticed something was amiss and lifted his crest in alarm. Moments later he was airborne, the entire encounter only lasted a few seconds but that was all it took to captured a couple of memorable images.

Note: Betsy in Tennessee was kind enough to direct me to her recent Northern Flicker post in a comment on my Camera Critters post. What I assumed to be a courtship display apparently was a mating dispute between two males. There were other flickers in the area perhaps the female was among them but upon leaving this perch both of the “boys” flew off together. Go figure :)

Gorgeous shots of this Wood Duck! I would be over the moon to see one of these!!

Beautiful pictures.These guys are sooo lovely,too bad they don't like to pose for you.
Blessings,Ruth

Wood Ducks have always been one of my favorite ducks. Their coloring is so rich and bright. This is a really super photo. I have a large print of a Wood Duck by Don Whitlatch but it's not as pretty as your photograph. Thanks for sharing...debbie

Love the Wood Duck photos. They are my new nemesis bird this season so I can totally appreciate your frustration.

You did an excellent job getting one though!

Definitely worth the wait. What a perfect capture. And that you got something that awesome in just a few seconds is just incredible.

He he, this irritates me as well. Birds should learn that a man with a camera is a friend, and a man with a gun is a foe :-)

What patience you have - and as you say - these wood ducks know humans are trouble. He is a sight to see in all his glory - great job!

The first shot is amazing, very nice composition, nice bokeh and surrounding.. Perfect I love it.

Those are great shots of the Wood Duck. They are so colorful and flashy. Nice capture!

Wood ducks are such pretty birds - especially the male I think. I have only ever seen one from a distance .. lucky you to capture the photo. The Buffleheads will not come anywhere near me when I have a camera and I so want to get a photo of them!

Your first shot looks like it belongs in a wild-life calendar. Terrific shot. A bonus for your great patience.

The Wood Duck is such a handsome fellow, so well captured by you.

Salty: I love that Wood Duck, I saw one on Saturday but didn't pay enough attention. I only got a head shot by accident.

Great shots of the woodies. They are hard to get. GOOD JOB

For the longest time, as a child, I never thought the wood duck was a REAL duck. Nothing could be that brilliantly colored. Then when I found out otherwise, I still never had the opportunity to view one in person. How regal they are! Great shots, Salty!

The Wood Duck's colors are so vibrant and beautiful... they really are a piece of art ;-)

Wonderful shots! Wood ducks are so bright, even I can identify them! I especially like the secind shot, where the blue sky is reflected in the disturbed water around him!