A common sight around the local wetlands is that of the singing Red-winged Blackbirds. As one of the early migratory arrivals they began appearing while ice still covered the local lakes and marshes filling the air with their song. 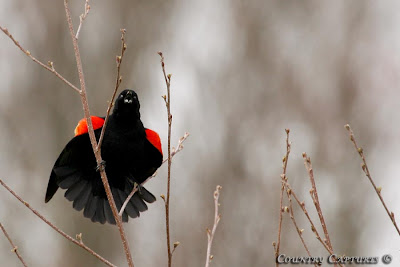 This first image was captured one spring morning when heavy rain clouds darkened the sky. The low light levels did not allow me to capture as crisp an image as I desired but I do like the pose and the overall appearance of the shot 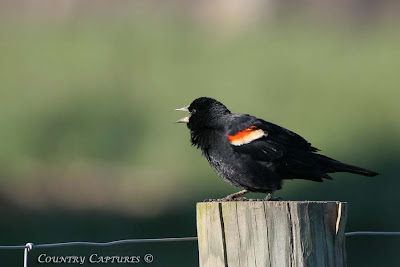 A sunny April evening provided direct light for capturing this bird singing loudly from atop a fence post. Both shots were made hand-holding my 100-400mm lens.

I love the RWBB. Reminds me of growing up and fishing!

Can you recomend a good camera basics online guide? I am trying to learn what the F thingy does. LOL

Both are terrific. I love their songs.

I've noticed a few of these beauties at my feeder recently. I'm wondering if they will stick around or head farther north?

You captured him in some great poses - all fanned out and singing his heart out!

Great photo of the RWBB. Show's his colors really well!...debbie

These guys are always fun to shoot and try to capture the mouth open. Nice work. Blue Skies.

Hi Coy,
I do love the two shots. The first one, I find the background very nice and the pose of the bird too. THe second one for its attitude and the nice boekh. Two cool shots!

WOW... That first shot is a winner for sure.. what a capture that was.. if I had got that my smile would have lasted weeks.. :)

I love the profile shot on the fence-post. Red-winged blackbirds are such fun to photograph in the spring, aren't they?

You are right...it's an interesting shot. It's the unusual poses that are captivating.

Salty: Love the front view, I've taken a lot of side shots but never a face on one.