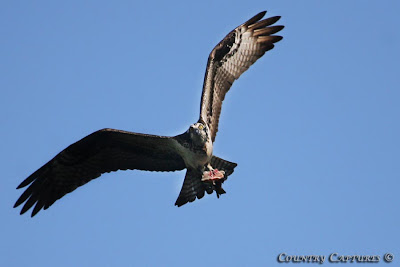 Since combining fishing/boating with photography Ospreys have given me a great many photo-ops. These images were captured during my latest encounter over the weekend.

As I slowly motored into a small cove the Osprey flew from a tree and perched farther back in the cove partially hidden by foliage. Readying the camera I continued my slow approach intent on capturing as many images as possible when it again took to the air.

When the Osprey again took flight I could see that it was clutching prey in it sharp talons. The bird flew to my right then executed a sharp banking right-hand turn passing over my head. This image with strong sidelight was captured during the Osprey’s approach. 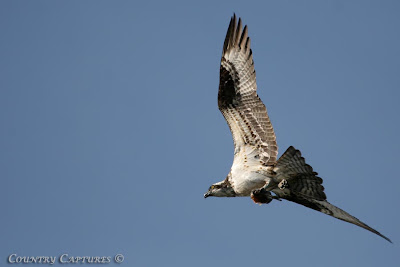 Swiveling on the boat seat I captured this image as the Osprey flew away with its partially eaten fish.

While reviewing these images I could not come to a conclusion as to which image had the most visual impact. I would very much appreciate your comments as to your favorite.

I like the first picture best but it was a hard choice. I think the bird shows more power in it.

I couldn't possibly choose the best one.They are both amazing.
Blessings

I would pick the first one. I just like the visual head-on perspective. Very nice photo. And Salty, thank you for your kind comments on my photos and publications. It's always fun to see one's photos being used in a publication. Thank you for your continued support. I am by no means a professional! Usually, it's a shot from the hip, or just pure luck!

An amazing set of shots!!

I think that my favourite would be the first one..

I think it shows the grace, power and beauty of this bird.

You can also clearly see it's prey, clutched in it's talons ...which underlines the other face of the Osprey ... the bird of prey..

Awesome captures Coy, and all while having fun fishing.

Both great shots Coy, but I must say the 2nd for me as its different and love the under wings colour.

The first one with the mangled carcass in it's "Talons".

...or in the words of Napoleon Dynamite... "Do the chickens have sharp talons?"

No wonder you are stuck for choice here Salty... if I was pushed to choose then I would go for the first shot, what sways me this way is the Ospreys eyes and the look of concentration in them...

salty: What a great capture of a neat bird.

This is a very beautiful series of action shots! Well done, i tend to have some difficulties to do fly shots, especially with the extender!!!