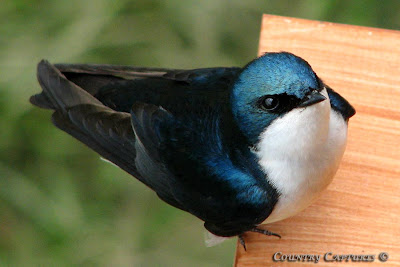 During the winter I built a few Bluebird boxes to place about my home. A Pair of Tree Swallows have taken up residence in this box attached to a deck support post.

While standing by the deck rail above the box this afternoon the swallows became concerned about the intruder and circled about quite closely before one lit on the box allowing me to capture this image.

Captured with a Canon S2 IS point & shoot from about six feet.

This is the same type of Bird that I took a shot of, but didn't know what they were. They sure are pretty. Wish I could have gotten that close.

This is a gorgeous shot and a very close one! I love this blue reflection on the plumage! Beautiful.

I don't think he is to happy with you Coy. Nothing has occupied my bluebird houses yet, but the gourds are filled with bird nest.

Great closeup. I love the sleek feathers and its attentive look.
Thanks for your kind comment on my post Salty. Its so nice to have blogging friends.

Well, it's a great capture. They are so pretty in blue.

That is a great picture.These birds can be quite trusting.
Blessings,Ruth

Love this powerful perspective. What a precious pose and charming expression this glistening Tree Swallow has!

What a beautiful bird, Salty! Isn't it a little east of its usual range? I've never seen one in western PA, I'm surprised that you have them at your place.

Great shot, Salty! I love the bright blue on the head, beautiful bird.

Salty: I have seen some at the lake but they don't have that coloring.

We have lots of Tree Swallows. We have 2 acres, surrounded by 5 acres on each side, then a open field in the back too. Great location for Tree Swallows and Bluebirds. They seem to switch back and forth using the many houses on all this acreage. The Tree Swallows tend to let us get closer than the Bluebirds do.

What a great and beautiful shot!!! Really pretty...debbie