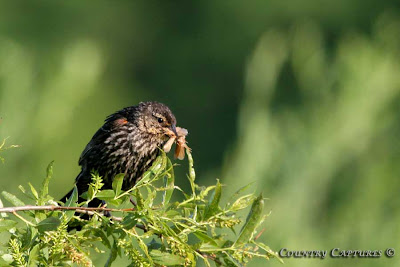 Bird activity is at a fever pitch around the wetland now as birds work feverishly to feed the voracious appetites of their rapidly growing young.

This female Red-winged Blackbird was worried that I was too close her nest but continued gathering insects and feeding her brood hidden somewhere in the brush quite near my position.

Returning with an insect she would perch nearby bobbing her head and fly from perch to perch while calling incessantly until after a few minutes she would disappear into the greenery only to reemerge empty beaked in a moment. Upon her return from the nest she would land among the bottom branches of the brush and continue her hunt for insects along the water’s edge.
Posted by Coy Hill at 6/01/2009 08:55:00 PM

Boy! she really has a mouthful!! Glad all I do is go to the grocery to feed my kids! lol...debbie

Great photo of her big mouthful - she's a good mother!!

Wonderful photo and such a devoted mother. Having raised five kids I can relate--always a mouth demanding to be be filled.

It's much the same here now Salty.. theres birds going backwards and forwards with food for their young... I've seen a few very tatty looking souls about who seem ready for dropping from all the work.. no wonder the moult starts soon.
Love the Waxwing below and if ever there is a picture that sums up a 'Country Capture' it's the Cotton Tail and clover in the meadow. Interesting reading.. glad to learn that they are back on the up.

Our yard is busy with birds, babies, etc. too. Busy time of the year. Nice photo of the Redwing.

I watched some parents of hair woodpeckers do the same thing. Except that they were digging the worms out of trees and bark. But it sure didn't take them long.

Voices from the past > http://bing-it.blogspot.com/

I love how industreous the birds are. There are several robins flitting madly about by my Mulberry tree. I think they are getting high on the berries and then going to feed their babies.

I think red-winged blackbirds near their nests are very hard to capture with a camera. Good one, Salty!