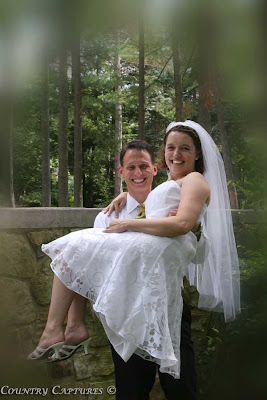 The natural props provided by the park setting came in quite handy when setting up the creative shots of the newly wed couple.

The stone wall made a great setting for Justin to hold his new bride in his arms.

While shooting a series of different setting and angles I became concerned that perhaps Justin was tiring but he was game and continued holding Amy for the entire scene. 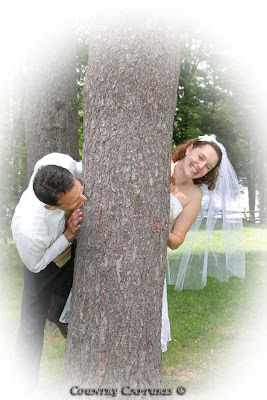 A tree near the pavilion proved the perfect place for Justin to try to find his girl. My thoughts for this shot were for Justin and Amy to look around opposite sides of the tree at the camera. Justin didn’t understand what I was wanting and instead looked around for Amy making a much better shot than I had envisioned. 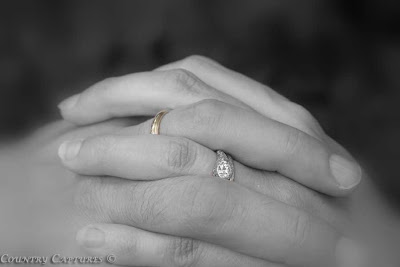 Clasping hands on top of a fence post the couple displayed the old rings now uniting a new couple. This scene lent itself well to selective color.

During this, my first wedding shoot, I used the Canon 30D with both 24-105mm and 17-40mm lens topped with a Canon 430EX Speedlight and a Lumiquest pocket bouncer to diffuse the flash.

Oh wow, these are great shots. It looks like Amy had a wonderful wedding. Good for you to be the photographer. I love the tree shot too.

Nice collection of images. You certainly could become a wedding photographer if you desired. Blue Skies.

Spot on Coy, you did a grand job there.

Love the tree shot. It captured the fun and happiness of their special day.
Great job.

Excellent, love the tree shot.... love them all if the truth be known Salty..

You turned from Wild Life to Man & Wife very well my friend :O)

Good stuff, Dad. I like that selective color image.

Oooh! how sweet memories! These are sooo lovely shots.