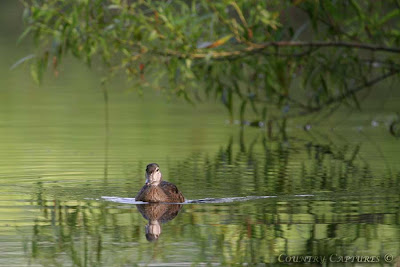 Finding some unexpected time on my hands because of an extended power outage at work I decided to visit the wetland this morning and hopefully check on the progress of the young Wood Ducks.

Dressed in camo and knee high rubber boots I set my folding chair and tripod in 8-10 inches of water surrounded by willow branches. The chosen position faced westward to best utilize the morning light.

Well after sunup I heard the whistling of wood ducks on the wing followed by the splashing of their nearby landing. Some time later this mature hen swam past only mildly concerned by my motionless form in the bushes. 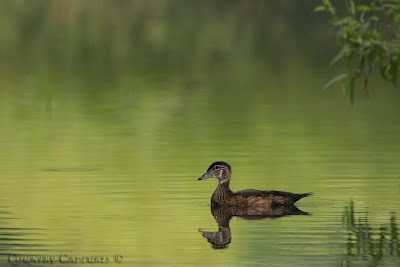 As the morning progressed I noticed ripples coming from the water’s edge a few yards to my right hidden by a screen of willow branches. Hoping that it was a feeding wood duck I decided to try a new trick to draw it into the open.

Using my foot I tried to mimic the slight splashing sounds of a feeding duck.

The ruse worked! An immature wood duck drake swam into the open looking for the other duck and I obliged by keeping my left boot toe above water, moving it about creating ripples. The young woody’s attention was riveted on my boot toe allowing me ample time to shoot a series of images. 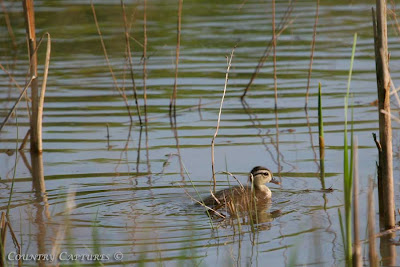 This previously posted image of a young wood duck was captured on May 15th of this year.

What a difference two months have made!

Thanks for explaining how you captured these photos. I've always wondered why I only see the ordinary ones. Now I know I have to get up early, sneak up on them and wait. ;-) Hmmmm.

Salty: That is a neat reflection shot for certain.

Beautiful shots! You put a lot of effort into getting your photos and it definitely pays off for you. I always enjoying seeing what you've managed to capture.

Excellent shots the reflection you captured was well worth all the effort. Isn't great when ideas pay off.. :O)

What a fantastic reflection! I love that green color.

Another great series here....that 2nd one just blows me away. WOW!