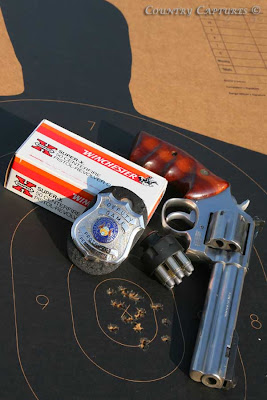 August was the beginning of the busy season during my twenty three years as a Deputy Wildlife Conservation Officer with the Pennsylvania Game Commission. Mandatory training was conducted over the weekend to accommodate us part-time officers who depended upon other full-time employment to support our families. The training covered a variety of subjects but first and foremost was deadly force training along with firearms qualification. Firearms are the weapon of last resort for a conservation officer. Proficiency in their use is very important for if the situation required them it would be in life and death circumstances.

The officers state revolver match also was held at Game Commission’s Scotia Range near State College Pa. on a Sunday near the beginning of the month.

Deputy Conservation Officers serve under the District Officer who is assigned to the area in which they live. My first District Officer was Mark Crowder, a man who was not only my boss but whom became a friend. Mark also was our first firearms instructor. Not only was Mark a NRA certified instructor but he was also an accomplished handgunner who enjoyed shooting and sharing his knowledge with others. During the early years we deputies would meet with Mark every other Sunday afternoon during the summer to shoot while he instructed us on the latest techniques and corrected our flaws.

This extensive training stood us well when the time to qualify came and also proved to be the winning combination when the Game Commission began the annual match in 1987. Mark and three of us deputies attended this first match garnering the third place team trophy. If memory serves me correctly I placed 21st or 22nd in individual score.

Knowing that we could do better the following year we practiced the course of fire intensely and the payoff for our hard work came. That year I was able to place third in individual score with my first first place finish in 1989.

Sadly this match was discontinued in 2005. The reasons were never stated but I feel sure that the tough financial straits the commission has found itself in had much to do with the decision.

The Fulton County team became known over the next two decades as the team who owned the match with officers from other areas mentioning to us that they had hoped that was would not attend as then they would have had a chance. Our team members varied over the years but thanks to the excellent training our district had a number of outstanding shooters. During the years that this match was held I was able to win the first place deputy trophy ten times and I have lost track of the teams wins but suffice to say our team placed first most years even in the years that I could not attend.

The old Smith & Wesson 686 .357 Magnum pictured here is the gun that I used along with one of the winning targets from the match.

Wow - apparently you DO have skills other than your wonderful photography! That's quite a track record. Good for you. I enjoyed this post a lot. My nephews have a guiding business (Milk River Outfitters), and I grew up in a family that hunted every fall.

Some things are quite sad though. I still remember when you received your retirement plaque long after your resignation and the District Officer could only say that the farmers around Needmore missed you a lot. You probably held the state record for winning the revolver match, but he couldn't bring himself to mention that.

I love this... and it is sure something to be proud of... In Britain anything like this or even the use of underpowered airguns are frowned upon... I have friends who shoot still and own guns legally but it is so hard now to obtain a licence.. and even then you can be targeted by the anti-gun (anti-anything)brigade, the local police will also be wary of you as well... If it was known that I held a gun, with a proper licence for keeping one.... if ever the police were called to my home armed responce would turn up..'just in case' I know of a young lad out shooting rats on a rubbish tip..... he was sat on an embankment shooting them as the rats were feeding on the rubbish. He was using a air rifle. .22 not very powerful at all. Someone reported a youth with a fire arm.. the local police, (who remember our police are mostly unarmed...)stand down until a ARV unit (Armed Responce Vehical) could get there... the lad was confronted with 4-5 armed police, he was told in no uncertain tones to lie flat and NOT to move.. Thats how bad it is over here... Guns are treated as something that are killers.... NOT the people that misuse them.
Even folks who use guns just on targets... and the guns are kept at these clubs.. these people are not trusted... 'Why would anyone one to shoot at targets' thats what they are up against... they do no arm, do not hunt, or kill animals... they just simply want to shot targets.. they are frowned upon. Britain really is a 'nanny state' and it seems to be getting worse.
As for knifes, it's worse.... I could not go for a walk in the woodlands with a knife on my belt... or anywhere on my person unless the blade was under 2.5 inch.. The law or law makers seem to think if I carry a knife it will mean that I might be tempted to kill someone with it.

You touched a raw nerve with me today.. ;o)
Tom
My blogs today show World In Miniature No.2 and our Granddaughter CaraJade

Great post bud. I sure miss the old days. Crowder sure was the best instructor i ever served under.