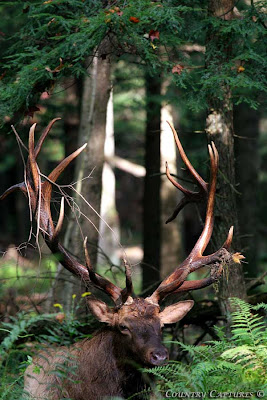 One of my favorite shots from the Pennsylvania elk rut is this portrait of a mature bull bedded among the evergreens and ferns.

After the elk had left the meadows in early morning Willard and I followed the bugling into the woodland. This bedded bull was bugling occasionally while at other times closing his eyes catching a moment of rest. After spending some time photographing him we were rewarded by the sun breaking through the clouds and spotlighting him perfectly.
Posted by Coy Hill at 9/30/2009 07:40:00 PM

Salty: That is one great capture.
BTW: I have been catching a lot of crappie in the 9" to 11" range. I caught on Walleye that was 28".

Ho Coy,
I kind of understand why this is your favorite shot. It is a splendid one... He posed very well for you and the angle of the shot, the compo and the light are just perfect. A beauty!

Coy, this is spectacular. The pose - the lighting - what more can I say!

Supurb shot! I have been enjoying your elk shots but have been traveling down the Alcan so haven't been able to do too much commenting. A couple of guys we met today had been up above Fort Nelson by horseback and said they had saw lots of elk. We saw none along the Alcan though.

Love his decorations all over his antlers. Nice capture.

That's a top notch elk portrait shot. Its my first time here, I m sure I will be back frequently...Thomas

This is just outstanding! What a magnificent creature - you captured this wonderfully.