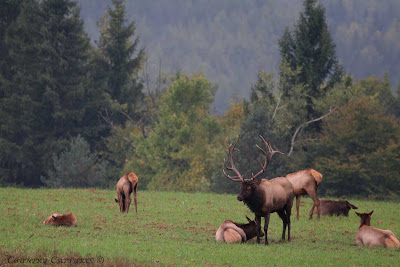 8x9 with Harem
Chris, in a comment on the previous post, expressed his concern as to the people disturbing the elk. I believe this photograph clearly illustrates that these animals show no sign of stress and are completely relaxed with the crowd of onlookers nearby. The people here are confined to a narrow strip along the road. To enter the food plot here is a violation of law. 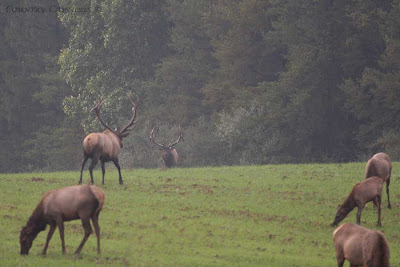 As the evening passed a number of bulls attempted to approach the harem. In each instance the dominate bull drove them away by simply heading their way.

Brad commented “I try and stay away from these areas also to get different settings and less noise.” Same here Brad, the traffic and people are quite noisy. Willard & I decided to spend this evening here because it was raining intermittently. We were concerned about getting the camera gear caught in a downpour. With some nice bulls around it was quite a bit better than sitting it out in the house. 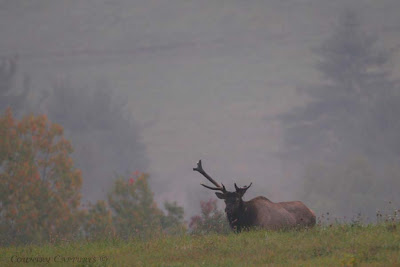 This challenger approached the harem a number of times but with only a few intimidating steps from the dominate bull he would beat a hasty retreat. From the looks of his antlers his best bet may be to wait another year and hope for a better set of head gear. This shot was made with Willard’s 500mm F4 lens. The rain and fog made capturing a sharp image virtually impossible. 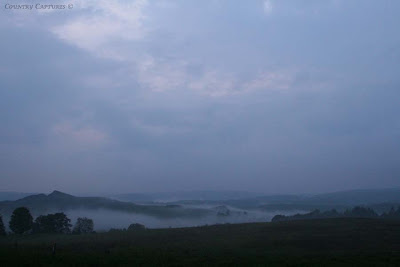 As darkness settled over the Gilbert Viewing Area, with fog rising from the valleys while bull elk bugled nearby, a good day of elk photography came to an end.

Hi Coy,
Thanks to answer my question! And you're right it looks like they do not bother at all and behave naturally. I'm a bit relieved. although I know you would be careful about not disturbing the animals.
Thing is, in Europe, nature photography is developing quickly, but people are almost ready to do anything to get nice shots of birds for example. They will feed them like crazy, run towards them to take pictures, and most of the time will scare the bird off!!! They do not realize how precious this is and that they have to be careful not to disturb this little thing!
I knew this was not your case, but was indeed, surprised to see so many people taking pictures of them :-)

Nice set of photos Coy. We saw our local herd of Elk just west of town yesterday. I didn't get very good shots of them, as they were quite a distance away and on the run. There were at least two bulls in the herd of 19.

Coy, I know what your saying, just being out is better than setting in the rooms. On Friday the week I was there after Willard, Buckwheat and Steve left for home it rained pretty hard. Not wanting to go back to the room I pulled into here alone and fell asleep. I woke up two hours later not knowing where I was and finding cars and people all around me. Took a few minutes to shake the cobwebs and come to my senses.

I am ready to go back.

Cool shots of the Elk, the dominate male can be pretty dangerous. I feel sorry for the male that lost par tof his antlers. Great photos.