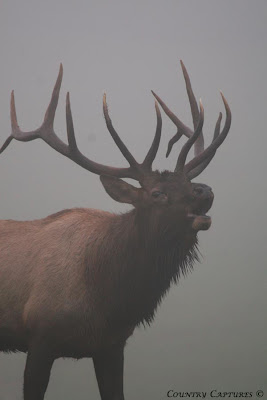 Although once silenced,
The Bugle of the Bull Elk again rings with defiance
Across the Elk Range of Pennsylvania.

In a comment on the Shagger’s Inn post Troutbirder posed a great question asking whether elk were indigenous to Pennsylvania.

To answer this question I turned to "The History of Pennsylvania Elk County" authored by Ralph L. Harrison.

Elk were present in Pennsylvania when the first settlers began arriving. Mr. Harrison sites locations over much of the state named for elk as evidence; using Elk Creek, Elk Valley, Elk Lick and Elk County as examples. He also sites Philip Tome (1782-1855) in his book, “Thirty Years A Hunter” as stating that he and his brother killed twenty five to thirty elk annually for years.

With the growing conservation movement across the nation’ Pennsylvania founded the Pa Game Commission for the protection of what little wildlife remained in 1895. In 1913 fifty elk were received from Yellowstone and released in Clinton and Clearfield Counties. From that first stocking in 1913 until its conclusion in 1926 a total of 177 animals were released.

The elk that Pennsylvania enjoys today are the descendants of this restocking effort.

Mr. Harrison’s book is an excellent read chock full of great information on both the elk and also the region. When I began reading it I soon found that I could not put it down.

Published by the Pennsylvania Forestry Association, this book is a great resource for anyone interested in Pennsylvania elk and the elk range This book as well as two others also written by Mr. Harrison can be purchased from their website by following the link above and clicking on publications.
Posted by Coy Hill at 10/21/2009 07:15:00 PM

That's a beautiful shot (again) of the Bull Elk. Love it. Your post was quite informative as well.

...love the elk through the mist. Beautiful...

Great picture of the elk. Very good post on the elk there. Thanks.

Thank goodness they are back and their voice echoes over the country.