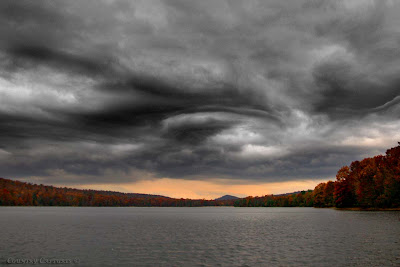 Friday afternoon I spent some time on the nearby lake as ominous storm clouds darkened an already cloudy sky. Having spent the early morning in the woodland I decided to spend the afternoon fishing only to have my outing cut short when a steady rain began to fall.

While watching the clouds swirl in I knew that soon I would have to beat a hasty retreat but not before pausing to capture some images of the pending storm. Upon reviewing the images my impression was that the camera had not captured the celestial drama I had observed. Loading the image in Photoshop and after applying some tweaking its impact is now greater than what nature created in the first place.
Posted by Coy Hill at 10/25/2009 06:49:00 PM

The impact on me was....WOW! The mood is perfect!

That is a great shot of the impending storm. The perspective is terrific.

Coy, thats sure some sky there, dont think I would venture out in that, unless I could get a good shot,lol.

Hi Coy,
What a shot! The composition is stunning and the clouds structure even more!!! Beautiful.

I see nothing wrong with the odd tweak... and would have loved to have been there to see this storm forming. Both me and Jane like a good storm... I have drove the landrover to the hill tops a few time to watch one form and head over. I have had no luck what so ever in catching a good lightening shot.

That is one wild shot. Very impressive!

Coy - this is OUTSTANDING. It's SO intense!
I truly wish I knew more about Photoshop. I just finished a college course on Photoshop CS4, but it was more for creating web images, rather than working on photos.

Absolutely stunning! This is my absolute favorite of all the photos I've seen today!