Poses of the Rut

This series of images were selected from a rutting encounter that lasted one hour. The location was the meadow at Big Meadows, SNP. As is normally the case here the animals were accustomed to sharing the terrain with hikers, photographers, and tourist etc. and was unconcerned by our presence.

When first sighted the buck was standing near his doe. Looking alert, he was keeping a sharp lookout for challenging bucks. During the rut, once the actual breeding has begun, whitetail bucks are often observed exhibiting this behavior. Notice the position of the doe’s tail; a sure sign that she is in estrus and ready for mating. 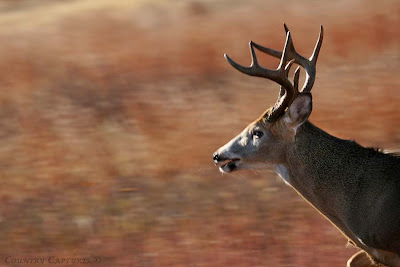 After standing for some time the doe bolted off across the meadow with the buck in hot pursuit. Panning and firing as the buck passed near my position I didn’t get this image as sharp as I had hoped but it does do a creditable job capturing the fast paced action. 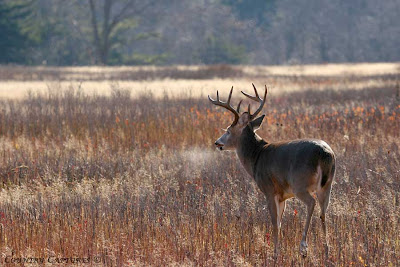 Catching up with his doe, the buck slowed to a walk. The short burst of exertion had him breathing heavily and the backlighting illuminated his breath as he expelled it into the cold mountain air. 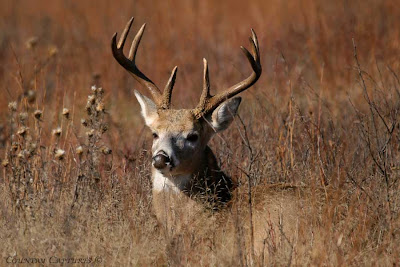 As the morning wore on drawing towards noon the doe lay down amongst some bushes with her protective suitor doing likewise nearby. With the likelihood of more rutting action from this couple quite low , Willard & I shot a few images of the bedded buck before moving on to look for more active subjects.

Salty: That is a great series of the deer in action, wonderful photos.

they look like they are just waiting for you

Wow!! Nice shot you've got here I wish nobody will get that buck I like them to live and not be eaten ^_^


Mine is here My Life’s Photo

Wonderful photos, Coy! It's interesting that the animals are so unconcerned about your presence.

Love the series of deer photos. They were all great.

Gosh, you could do a very nice book with all these shots you showed us... The last one of this set is marvelous!

What a lovely series! Thanks!