Sparring between bucks can occur anytime after the velvet has shed from their antlers up until the time that they drop their antlers. Sparring matches begin with the participants approaching in a friendly manner. The bucks typically will gently bump heads and proceeds to where some pressure is applied while they jockey for advantageous angles.

During the sparring match the bucks will stop momentarily to check their surroundings sometimes licking or grooming each other before resuming their friendly match. 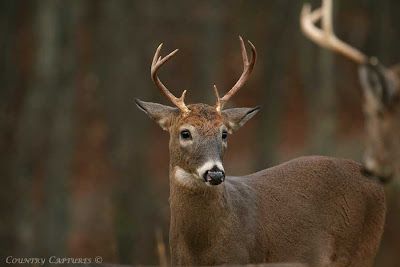 A fight between bucks is entirely different. As the two bucks approach one another it is apparent to the observer that a serious encounter is about to ensue. One or both of the bucks will lay his ears back with a threatening expression on his face while circling his opponent . Most times these encounters end with one buck being intimidated and skulking off. 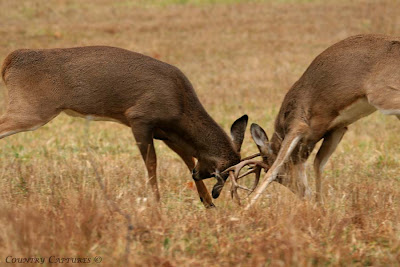 At other times no one is about to give up that easily! After circling about for a short time the bucks will suddenly come together with a crashing of antlers. 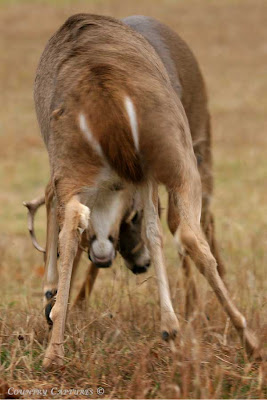 With muscles and sinews straining the combatants jab, parry and thrust using every ounce of their strength to overcome their rival. 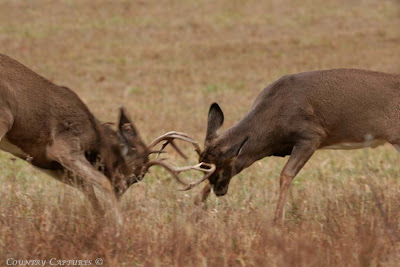 Whereas a sparring match can go on for an extended period of time a real fight most times will be extremely violent and of short duration. The end of the fight will come even more suddenly than the beginning. Sometimes it is when one buck looses his balance, other times one simply feels overpowered or is injured. What ever the reason when one gives up he does it quickly, breaking free and fleeing as fast as he can possibly run with the victor in hot pursuit for a short distance.

Nice catch! Mine is up. Hope you can drop by to view my very first entry. Your visit is a blessing. God Bless!

Wonderful photos as usual. You always get so great shots of the deer.

I love these! Again, I have to say just how lucky it must feel to see this action! I can never get tired of seeing this behavior!