Whitetail hunting literature is chock full of information about buck scrapes. I captured this series of photographs of a mature buck while he was engrossed in making a new scrape. 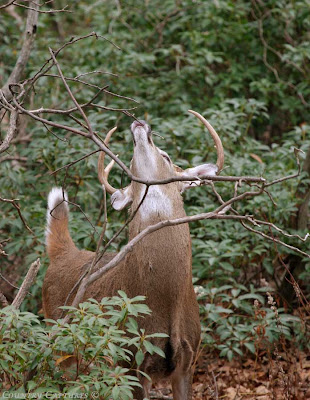 Once he chose the site of the scrape he began horning the overhanging branches, chewing on a branch and rubbing his face on it. 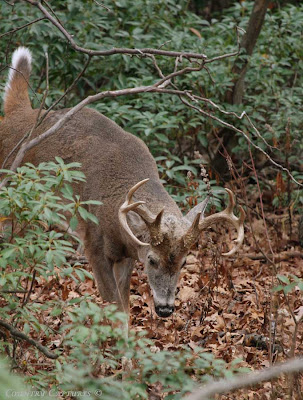 Once he was satisfied with his work on the overhanging branch he went about pawing in the fallen leaves, clearing a bare circle of earth. 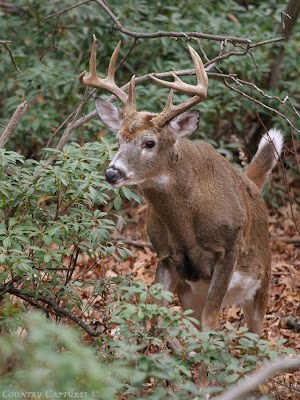 After urinating in the scrape the big guy moved on, obviously well satisfied with his new signpost.

An encounter like this is a special moment, a small peek into the normal life of a beautiful wild creature.

This is indeed a special moment and to be able to capture these images is fantastic.Thanks for sharing them.
Blessings,Ruth

I love that you and your brother are able to share your incredible experiences with us! I was not been so lucky on my first trip to SNP, but after seeing what you, Willard, and Brad have posted I can't wait to try again!

Thank you for sharing these great shots of an event few people get an opportunity to observe even in photos.

Great job Coy, was this a local buck or from SNP? My son and I are heading back down Friday just for the day, looking for that monster buck.

Awesome behavior shots! I still don't understand how you capture these moments so close! There is no way I could get away with that, they would sniff me out and bolt (If I was even that close)...

Again, you have captured that big 8-pointer very well. Would love to see something like that myself. In my hunting years, I have seen many scrapes, but never got to see who made them.

I never know what kinds of photos and educational tidbits I will find when I tune into Country Captures, Salty...always a fun surprise! Happy Thanksgiving to you and Mrs. Salty

These are gorgeous photos and he is an amazing animal. Not many survive hunters to live that long.

Heather,
All I can say is keep on trying. The area between the Luray entrance and Big Meadows is usually quite productive.

Hannibal,
To get the really good natural shots one must photograph where deer are not hunted and totally accept human presence. SNP is one of those unique places where these kinds of shot can be had.

Corker,
Like you I have seen many scrapes while hunting but the hunted deer are too wary to allow good photography, like Hannibal said, one whiff and they are gone.

Phyllis,
You’re right, in SNP the deer doesn’t have hunters to worry about as long as they stay within the park boundaries.

You were lucky to get this beautiful animal on camera. We were out and about last weekend and just my luck didn't have my camera and spotted one and he was a beauty.
Maybe not as handsome as this one but pretty darn close... gorgeous shots!!