A Time to Heal 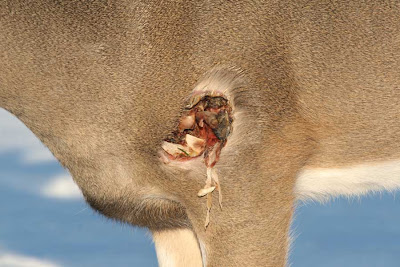 I first observed this doe’s wound on December 2nd, the third day of our rifle season. At the time she was having considerable difficulty walking. The wound appeared to be a day or two old as there was no sign of fresh blood. It wasn’t until December 23rd that I had the occasion to photograph her wound.

A close examination of this image shows visible fragments of broken bone. This bone damage precludes any future use of the leg but as many of us are aware a deer can do quite well on three good legs. 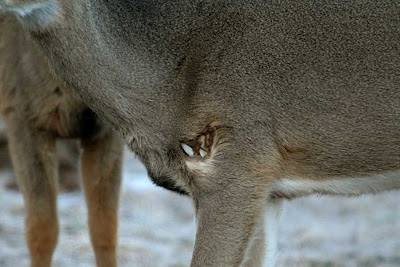 Photographing her once again on January 20th I was pleased to see that the injury is closing and continues to shows no sign of infection. The doe walks with a considerable limp but runs nearly as well as a healthy deer although the injured leg flails about uselessly.

We will never know whether this injury was inflicted by a careless hunter, buy a hunter who didn’t know where to place a bullet for a humane kill or if it was the result of a carefully aimed shot going awry. Perhaps an unseen twig forced the bullet from its intended path, or maybe the doe moved as the weapon was fired.

What ever the cause of the muffed shot this doe has suffered considerable pain and disability from an injury to flesh and bone of this magnitude. She stands in testimony to the strength and endurance of the whitetail deer.

Heart wrenching but inspirational st the same time. I just adore these animals!

Coy, this is one thing that I feared doing when I used to hunt. Even though I was very choosy on what I took aim at, using my .308 cal. I always tried to make sure of my shot before pulling the trigger. Making sure that there is no chance of my shot going astray. A good clean instant kill.

This is also something that I don't like to see on a Deer no matter what gender it is. I'm not too fond of seeing an animal suffer, because of what someone that was not careful, did. In my years of hunting, I have seen what Trappers can do, by not checking their traps. The poor animal died of starvation. A fox that was still trapped in the jaws of a Trap, laying there dead. Pissed me off, to say the least.

By writing this good Post, I hope that it will make those out there that hunt, fully aware of what can happen when they are not sure of a clean shot.

Poor thing! It is amazing how strong those animals are and a miracle that she's still alive and running. It's sad that some hunters are so cruel - or ignorant - or just simply stupid.

Such a nasty horrible injury.
Amazing how she's recovered, eventhough she now has a limp.
Don't like or enjoy seeing animals suffer, in particular wildlife as they're so afraid of any help from human intervention.
I'm sure you're relieved you had the chance to see her again.

That's terrible. Every year those kinds of things happen. A couple years ago we came across a spike Mule Deer buck that was missing one of his hind legs right below the hock. He could still run like the devil and jump fences. They seem to adapt. Don't know whatever happened to him though.

Good post Coy in documenting the progress of this doe. It is good to see no infection and at this point I would assume there will not be any.

This is the reason my father stressed his hunting ethics on me. If you were not positive of the kill you never took a shot. When I hunted I never fired the rifle without taking home a deer. I may not have killed as many as others but I was fine with that.

I have been around looking just a little short on time these days for commenting.

Excellent post Coy. I'd like to think this was a pure accident but I doubt it. One wonders how many other deer are roaming around with untreated wounds. The animal rights activists would have a grand time with those pics over here!

Just too sad to see. Its heartwarming to see her strength and endurance in the light of her wound.

If the hunter did not make every effort to follow this up...it's highly unethical at best.

She's a tough ole gal, indeed! Wonder if the leg will atrophy?

It is pretty hard to look at and I can't help but imagine what she is going through, but hopefully she survives this wound and keeps her distance from humans. Thanks for the updates on her!