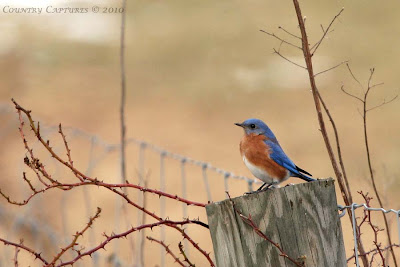 A few days ago during a light rain I noticed some Eastern Bluebirds sitting on a line of fence post that runs between a pasture and a hay field. Wondering what drew them there I decided to observe them for a spell.

Soon a bird left its perch and flew into an area of the hay field searching among the stubble where the snow had recently melted. Moments later it flew back to a post with something in its beak. Dropping its morsel on the top of the post he pecked at it for a few moments before swallowing it.
As I watched the birds repeatedly flew to into the field and returned. I could not get as close a look at what they were catching as I would have liked but my best guess was that they were catching slugs. 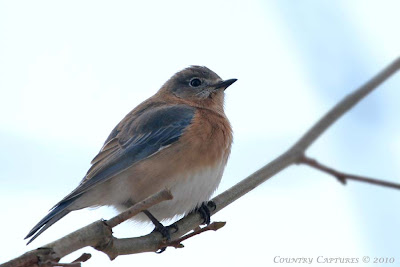 This female decided to check me out while perched on a branch nearly overhead.

The next day our weather turned cold and blustery and I haven’t seen the bluebirds since.

That first shot is breathtaking...the composition and the colors...all are just FAB!
WOW!
I LOVE Bluebirds!

Oh, yes, that first shot is a stunner!

Fantastic firs shot... This bird is so beautiful and you got it so well! Well done Coy!

Yup they are both very nice, but the first one is superb!