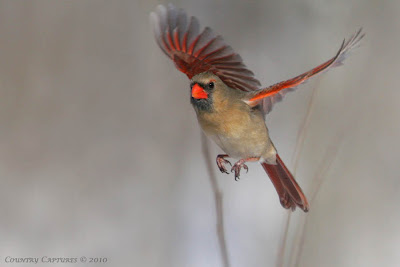 Always looking for a new photographic challenge I decided today to focus upon capturing our feeder visitors in flight. To tell the truth the task was considerably more difficult than I had envisioned. From the afternoon’s shoot I only came away with a handful of reasonable sharp images of which I consider this female Northern Cardinal to be the best. 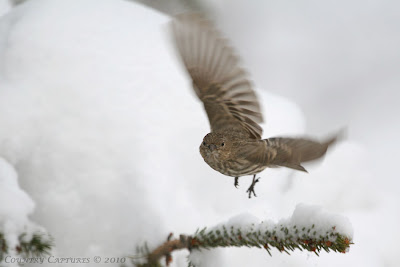 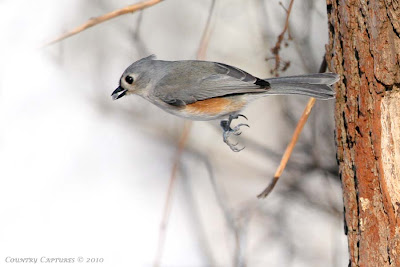 This Tufted Titmouse is leaving a feeder with a sunflower seed gripped tightly in its beak. With its wings folded at the moment of capture it appears to be leaping instead of flying.

The first issue in capturing these flight shots was finding a shutter speed that could be depended upon to stop the motion. I have shot ducks, herons etc at longer ranges and have found 1/1000 of a second to give reasonably sharp shots while panning. With these speedy little birds at close range I needed a much faster shutter speed, 1/3000 or more.

The second issue was keeping the bird in the frame. To get frame filling shots of these small subjects requires being close, to close to pan & focus so I worked with focusing upon them while they were perched and trying to capture them as they took flight. This meant anticipating which direction they would fly and aiming the camera accordingly then attempting to read their body language to anticipate when they would take flight and firing a burst. Needless to say I captured a number of burst where the bird sat still the entire time and then flew just as I released the remote.

The third issue was focus. Focusing upon these fast moving birds was out of the question, I ended up just focusing upon them while they were perched and then hoping for the best.

Well they turned out just superbly. Great work. Love the Titmouse with its wings folded back.

Excellent pictures.I am not good at in flight shots.Guess I will have to do more practice.
Blessings,Ruth

Hi Coy,
Very cool shots indeed. The tufted titmouse jump is fantastic and also funny.. To see this bullet jumping is very nice!! Well done, this is a beautiful set of pictures!

Geat job Coy, it is one of the harder things I photograph and most find the delete button.

I agree with the female cadinal photo, it came out great.

Tough assignment Coy but your method paid off. FAB.