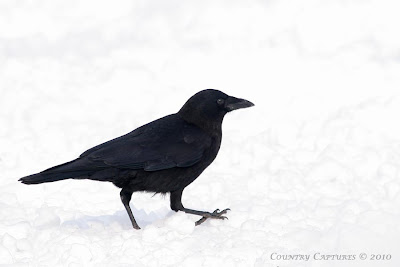 Ubiquitous across North America, hated by some and tolerated by others the American Crow can be seen nearly everywhere. Crows are present in the deepest wilderness as well as rural and urban environments. With a lifespan of up to thirty years these birds are considered by some as possibly the most intelligent of all birds.

The combination of excellent eyesight, high intelligence, and their habit of foraging in flocks with a lookout posted at a strategic observation post ready to call the alarm has made these birds quite successful in their coexistence with humans. A crow has no problem distinguishing between an armed and an unarmed person, even at three football field’s distance.

Crow are omnivorous and will never miss an opportunity to clean up any carcass they happen to spot, even if it is lying on a busy highway. I once worked with a man who jokingly said that among the items on his bucket list was his desire to roadkill a crow. I laughed when he said it and then paused; I had never seen a dead crow lying along the roadside! And now twenty five years later I have yet to encounter my first.

As common as the common crow is this is one species that had defied my efforts to capture a good image until this past weekend. Not only are most crows extremely wary but being a black bird with a black eye it can be difficult to capture eye detail. With this close encounter the situation was doubly difficult with the crow on the snow. Shooting on AV (aperture preferred) I over-exposed 2 stops to properly expose this bird.

You captured great detail in this bird.Does this surprise me? No,because all your images are excellent.Now if only I could improve my photography techniques.
Blessings,Ruth

Great picture. You really got the details. You're right...I've never seen a roadkill crow either.

Nice informative Post. The common Crow that we see around here is what you say. A very smart bird. Not dumb, at all. Sometimes referred to as "Natures Garbage Pickers" they will always jump at the chance to make a meal from a road kill.

In my years of Hunting, I've found that they are very noisy, at times. Their raucous calling let's other wildlife know you are around. Crows and Owls don't get along too well. At one time, we put a stuffed Owl in a tree near-by a bunch of Crows just to see what they would do. The Owl was attacked so bad that it fell off the tree branch. They don't take too kindly to them. There is sure to be a fight.

Hi Coy,
What a contrast you had to managed there! Not so easy to deal with a black bird on a white background but you did it well. This is a very nice picture!

Very nice shot. The Black and White go great together!