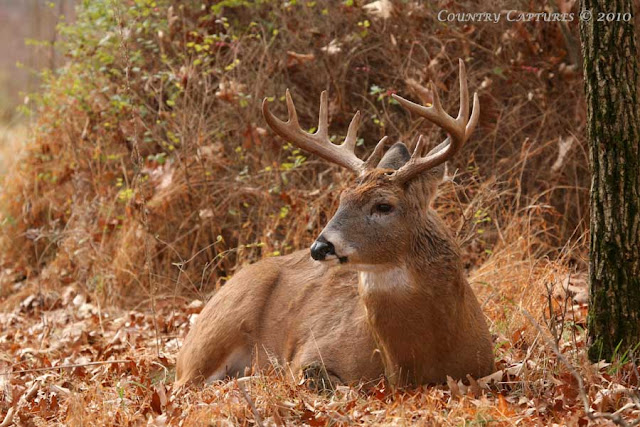 Continuing from yesterday's post; after leaving the woods Willard & I decided to drive around some before bidding SNP farewell.  Some vehicles parked on the side of the road and a small cluster of people a short distance away alerted us to a very heavy racked ten point resting nearby.  He obviously was comfortable with people being nearby so we joined in. 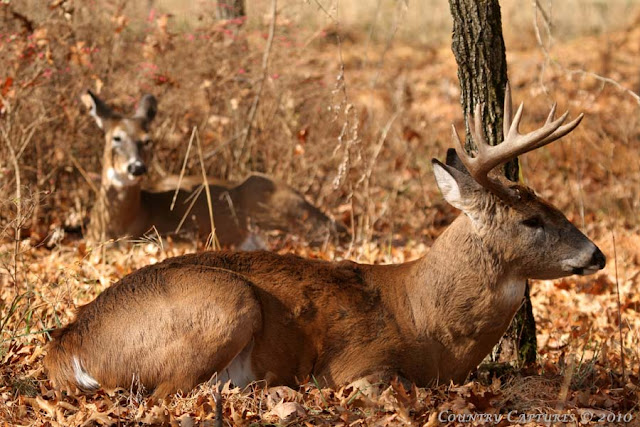 Moving around the buck allowed me to capture him along with the doe he was protecting.  When does become receptive it is common for the dominate buck to stay near her while keeping a sharp lookout for other bucks attempting to cut in. 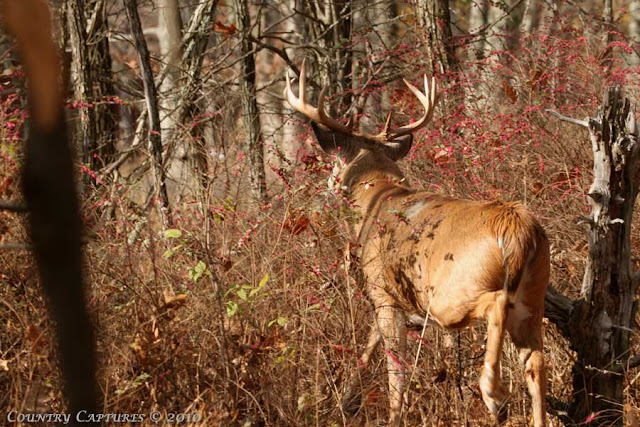 A small eight pointer was staying close by and occasionly try to sneak in on the resting pair.  When this happened the big fellow would jump from his bed and with a rush and a grunt drive the amorous little fellow off. 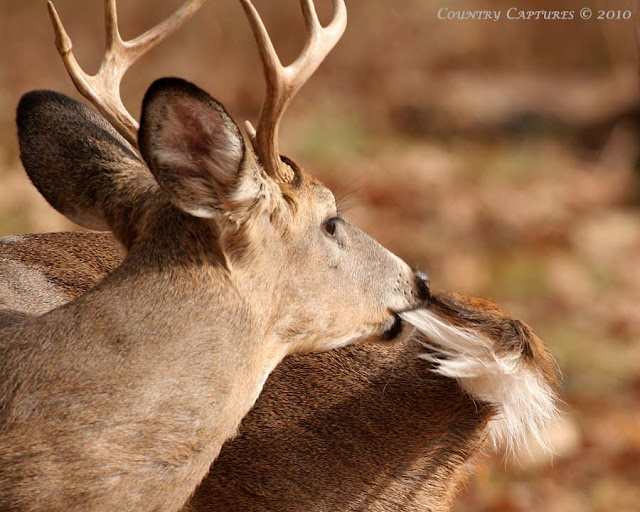 After a few rebuffs the small buck took cover directly behind me and my tripod.  Whereas before he seemed very nervous after finding a measure of safely he relaxed and groomed himself extensively. 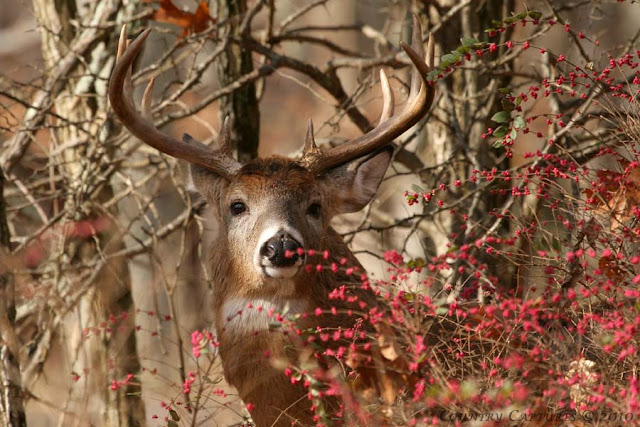 The big buck, thankfully not wanting to plow through a photographer, stood his ground and watched.
Usually when taking a portrait shot I attempt to attain a clear unobstructed view of the subject but in this case I liked the added color of the red berries and intentionally set the shot up with a them falling across his nose and neck.  Do they add to the image or do they detract?  Tell me what you think.
Posted by Coy Hill at 11/09/2010 07:58:00 PM

Oh, I like the red berries in the last image. The whole series is very lovely. Yes, I'm glad the photographer wasn't trampled!

Thanks Lois, I'm glad the photographer wasn't trampled either :)

When getting up-close with an acclimated rutting buck like this one should carefully watch his body language and be ready to back off at any hint of aggression. In this encounter the only aggressive behavior he exhibited was towards the small buck.

Coy, this is a terrific series. But that last shot - well, what can I say? It's fabulous, and the red berries very much add to the scene - they in no way detract from it. GREAT JOB!!

As always ~ a fine group of photos. Pat yourself on the back!! LOVE the berry shot.

Fantastic series! I like the effect of the red berries and that shot is my favorite.

Coy, what a great story and the series of images are just Fantastic. The bottom image needs to adorn your Christmas, or holiday greeting cards, Delightful~

Coy, I like what the berries add to the shot. When photographing deer in the wild like last this week when they spent all there time in the woods and not the meadows it is difficult to get an unobstructed view. It looks like you had a good morning and I got to spend hours with these creatures over the following five days.

It was a difficult week unlike any other. One really had to work hard to find the bucks and photograph them. I did not see this 10 point buck on this trip but I did photograph him in October and numerous times last year.

I know what you mean about being careful around a rutting buck, the last one I photographed yesterday afternoon scared the pee out of me and had me back tracking.

We also had uneducated poeple moving deer around on us, but the best was when they went someplace they should not have and I waited for them to drive the buck right to me. They did, I got the shot and they got nothing. It pays to understand the deer.

Great series of photos, I will start posting mine next week.

Wow you are the master of these kind of shots! The words are missing to tell my feelings in front of such a great collection... Awesome!

I can't believe you were between the bucks! Wow, that is amazing! I love the entire set you posted here, but the last one is truly special BECAUSE of your intent! Awesome work Coy!