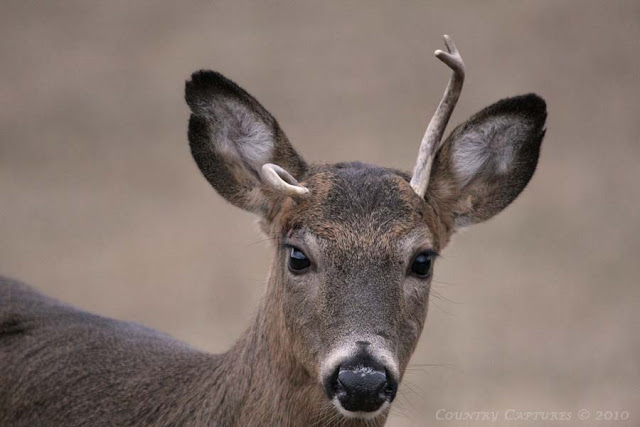 Frequently seen during the summer and early fall this young buck disappeared during the rut.  Upon his return a few days ago it was quite evident that the rut had left him with a nasty injury. 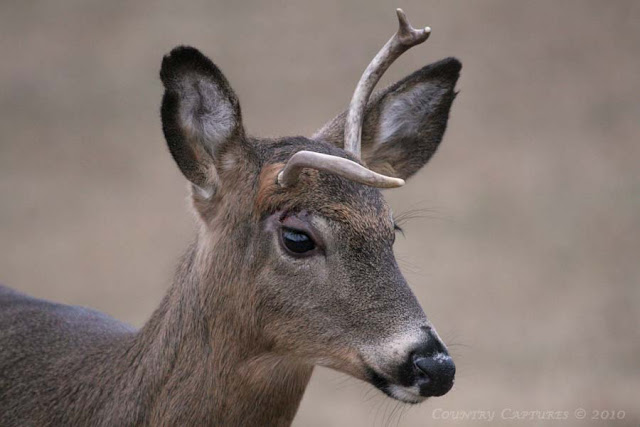 As you can see his right antler points unnaturally forward, the result of his antler pedicel having been broken where it intersects with his skull.  An abscess which formed at the injury site opened near his eye causing the hair loss above his right eye.  He seems to be doing well and although one would think this would be quite painful I did observe him gently sparring with another young buck a couple of days before I captured these photos.

It will be interesting to see if the pedicel will straighten after shedding or of it will reattach to the skull in this awkward position.  I hope he makes it through the upcoming archery/flintlock seasons and continues to stick around.
Posted by Coy Hill at 12/26/2010 04:26:00 PM

Amazing that you were able to see this! It's a wild world out there...

That looks like it should be painful, but hopefully he will recover from his injury and also making it through hunting season.

Not nice at all for the young chap but as I have observed with teenage boys, they tend to hurt themselves and also let things mend themselves. Only their grandmothers worry about the lasting nature of their injuries.

I sincerely hope he eludes the arrows and bullets and you see him again next year.