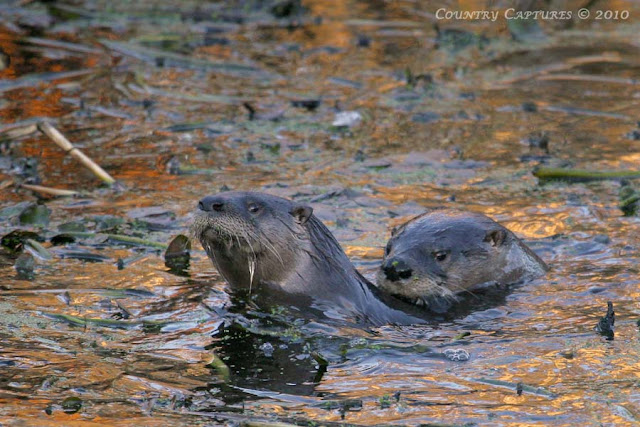 During my recent Florida visit Chad and me were busily photographing the incredible bird life at a small roadside wetland when I began noticing occasional ripples of water emanating from under the low bridge.  As time passed and the ripples continued I walked nearer trying unsuccessfully to peer under the bridge and locate the source of the disturbance.  Drawing Chad's attention to the ripples I stated "there is something alive under there"!
After a few minutes we moved across the road and had just gotten our tripods set up when three Otters swam from beneath the bridge.  The Otter's reaction to us was more one of curiously as the rapidly swam about alternating between diving for food and popping up, looking us over as they chirped and huffed. 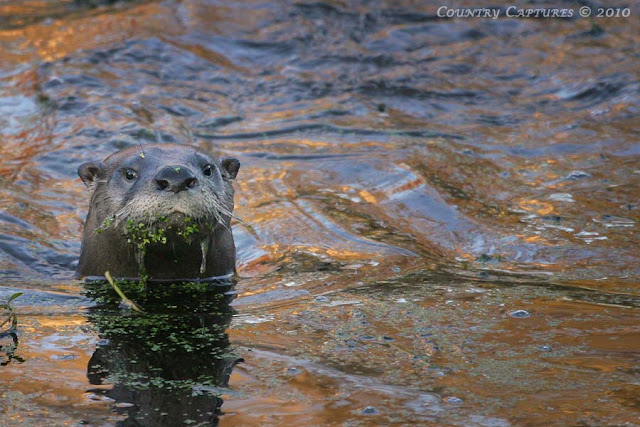 The Otters were in constant rapid movement and I was very much concerned that it would be impossible to get sharp photos with the light levels present.  Although the sun had just came up in the eastern sky only the reflected light from the surrounding trees was lighting the area. 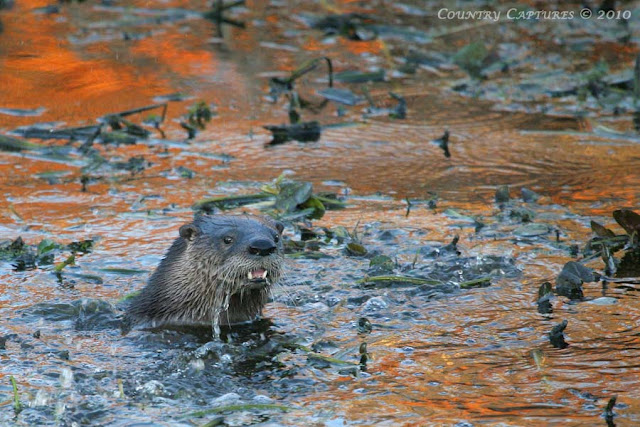 Occasionally an Otter would shake the water off.  In each case I was just a little behind and did not capture the full effect of the spray flying through the air.  In this shot you can see the water appearing to boil as the spray hits the surface. 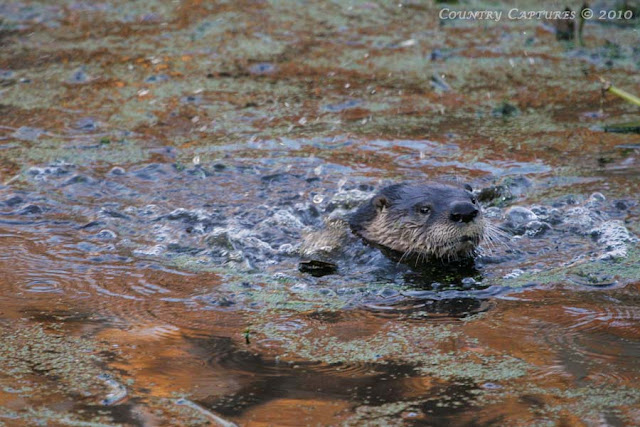 A few flying water drops are still visible in this photograph.
After seven minutes of action the Otter experience ended as abruptly as it had began when all three left the pond; scurrying away through the thick undergrowth.  This was my third encounter with Otters in the wild, the second of which I was able to photograph and truly and unforgettable experience.  I am very thankful that I was able to share this rare moment with Chad.
For more Critters of all Kinds
Visit our good friend Misty at her
Camera Critters Blog
Posted by Coy Hill at 1/01/2011 05:30:00 PM

Thanks so much for sharing this special moment.
The pictures are great,the sun reflected in the water.
Blessings,Ruth

This is just very special. How lucky you are! Otters are quite playful I think.

Coy, please tell me again, what kind of camera do you use? Are you still using the Canon 100-400 mm lens?

Oh, I love otters and these photos (even if you were a little 'late' on the water-spraying) are lovely. The early-morning light is beautiful. I love the photo of the otter with the green beard!!
-- K

Mona, I am still using the Canon 30D with a 100-400mm as my primary telephoto. I'm hoping to upgrade to a 7D sometime this year.

I've missed visiting you, will come back more often, as it always puts a smile on my face. Thank you :)

They are just the most entertaining creatures! I've seen them in the wild a few times but was never fortunate enough to photograph them. Nice shots, Coy!

These are wonderful! I really like the golden reflection on the water. The second photo is lovely with the green clinging to the otter's chin while he studies you as closely as you were studying him.

Wow that will be a real plus for me if I could see this nice species!!! Gorgeous shots Coy, and happy new year!

Oh what a day for you! I can't imagine how cool this experience was! I am still waiting for my first otter experience, as supposedly there are rare sightings in the rivers around. Do they exist here will only be told when I have my first experience. I envy your sighting and great captures even in low light. they are awesome!