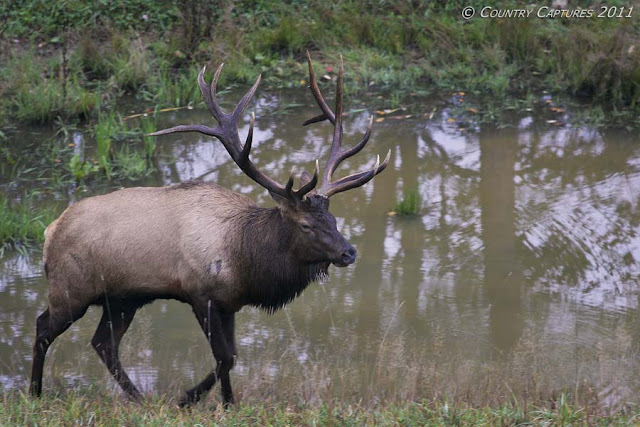 Sifting through my archives from 2008 I came across this image of the Spring Run Bull taken during that year's rut.  We had a number of close in photographic encounters with him and I came away with a quite a few decent photographs.  It was during one of these encounters that Ronald "Buckwheat" Saffer captured a bugle shot that made the cover of Bugle Magazine.

This bull, like nearly all bulls encountered on Winslow Hill was very trusting of humans; allowing us to photograph him with no concern for our presence.  Also like most impressive bulls seen on Winslow Hill he was killed during that year's elk season.

For more in depth information about the issues surrounding the Pennsylvania Elk herd visit Willard at Pennsylvania Wildlife Photographer.
Posted by Coy Hill at 1/27/2011 08:15:00 PM

Another superb shot Coy! I wish we had elk close by here to let me have a chance to get shots of them. I really enjoy your work! Kudos!

He sure is a beauty. What a shame that they're allowed to be hunted.

A truly majestic beast. Thank for sharing the link to Willard's post .. it was very informative.

You have some of the most amazing photographs! This is SO majestic!

He was a magnificent creature!