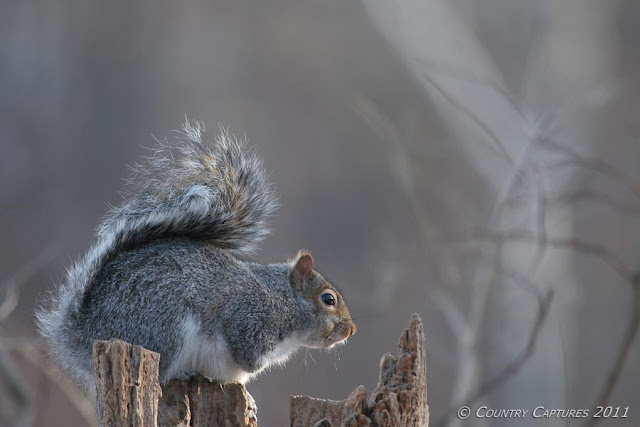 The thermometer read 8 degrees when I headed out this morning, the coldest morning yet this winter.  The snow squeaked under my feet as I walked to the truck.  Bundled up as I was the cold quickly began seeping through the thick layers of clothing.
After watching and photographing this squirrel I was convinced that not only was the cold bothering me but it was bothering the squirrel as well.  While the little guy sat on lookout he would clutch one front paw to his body warming it in his thick fur.  A few moments later the squirrel would switch paws giving each paw equal treatment.
Come what may; cold, heat, rain, snow or sun ,wildlife meets the challenges of the environment head on.  Survival depends upon the abilitly to find food and shelter without being able to alter their environment in any great way.
If we humans could not alter our environment any more than wildlife we would never have became the most successful species inhabiting the earth.  I shudder to think what facing this morning would have been like if I had to face it naked, like this little squirrel!
For more Critters of all Kinds
Visit all of the Critters at
Misty's Camera Critters Blog
Posted by Coy Hill at 1/22/2011 04:48:00 PM

That's true - but he does have a nice thick fur coat on, so I guess he's not completely naked! LOL

I see that squirrels are a common there for us this week! The cool cast of the this photos helps to accentuate the cold feeling of the squirrel. Well done!

He does look rather like a cold squirrel! Our squirrels are probably not enjoying the winter much either since we are having a lot more snow then usual!

I am visiting via Camera Critters and I'm a new follower. Would love to have you come visit me as well :-)

Surviving the winter is tough on the animals. I look at the birds with those skinny naked legs and wonder how they don't freeze solid. Then again a lot don't make it through the winter. You have excellent photos on your blog. Keep on clicking.

Love the shades of brown and gray, and the clutching of the little paw. Definitely says "cold"

Beautiful capture! The colors are wonderful. It is way too cold out there, I hope the critters are able to tough it out this cold winter.

It's a spectacular photograph, which makes me want to invite the little critter in to lay on my blanket ;-)

I'm not real fond of these little guys visiting my bird feeders in the summer. But in the winter when the pickins' are slim, I don't get too upset. They are kinda fun to watch from the kitchen window.