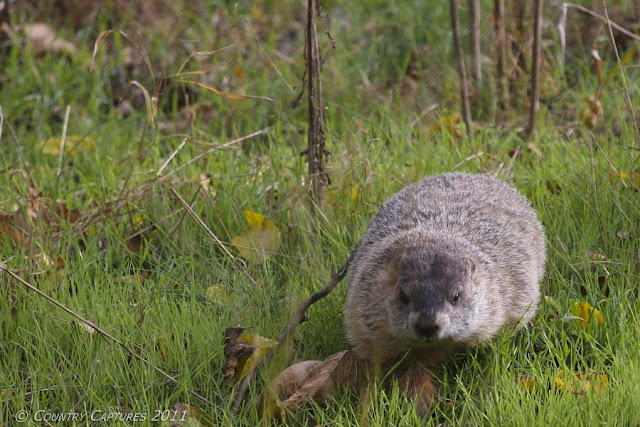 Groundhog preparing for hibernation 10-30-10
February second is Groundhog Day and the famous Punxsutawney Phil will be on hand checking for his shadow; forecasting the end of winter.
Of course whether he sees his shadow or not there will be six more weeks of winter but look on the bright side we are half way through.  Within another month the first harbingers of spring will begin to appear.  With snow and ice on the ground and a cold rain falling I for one am relishing the thoughts of spring.
You may think that all groundhogs are warmly tucked away in their dens now but did you know that their mating season is about to begin?  Males will soon rise from their slumber and make their way across the countryside in search of denning females.  Soon it will be possible to see the occasional groundhog sunning itself on a sunny southern exposure during the afternoon.
Growing up on the farm I learned at an early age that groundhogs were despicable little beast.  They ate crops and dug holes "that a cow could break its leg in".  Reading a steady diet of outdoor magazines including Pennsylvania Game News I learned that there was one good use for groundhogs; target practice!  Why there was a class of hunting rifles designed with these pesky critters in mind; varmint rifles.  Putting all of this learning together I busied myself acquiring the tools of the trade and attempting to rid our farm and surrounding area of these problematic varmints.  Starting with an iron sighted Stevens .22 and moving to longer range outfits as my meager finances would allow I continued my varmint hunting quest.  The addition of a scoped 22-250 to my battery made the 300 yard and beyond groundhog shot possible.  Many a hot steamy summer evening was enjoyably spent hiding along a fence row waiting for a "hog" to pop its head out of its hole.
Now I look upon the lowly groundhog in a completely different light.  I now realize that the groundhog provides benefits for other wildlife, their dens are sometimes recycled into fox dens.  The holes also provide shelter and safety for other wildlife as well as aerating the soil.  Groundhogs and their young provide food for predatory mammal and bird species as well as carrion for vultures.  In short they are an intrinsic and important part of our environment.
As for cattle breaking their legs in groundhog holes; I would expect that it has happened but I have never heard of a specific case.  Probably another of those things that cause some folks to worry needlessly.
Do I still kill groundhogs?  Yes, on occasion but only when by their digging they threaten to undermine one of our farm building or when one grows too fond of the veggies growing in the garden.  Otherwise they can tromp about unbothered and I'm happy just to see that they are there.  Come to think about it the groundhog pictured above was the only one I shot last year.  And as you can see I shot it with my Canon.
Posted by Coy Hill at 2/01/2011 08:03:00 PM

They look harmless enough. Our Prairie Dogs give concern with Horses or cattle that might step into one of their holes. Nice shot of the little "varmint". lol

Thanks for sharing more detail on these guys than most folks get. It's also nice to learn of your personal change of viewpoint with these fellas. another superb post!

Nice photo of the groundhog. Interestingly enough we have the same critter here in cental Alaska, although it's called a woodchuck here. There are three marmot species in Alaska, the woodchuck, the hoary marmot, and the Alaska marmot. We had one of the woodchucks in our yard this last summer. He was a bit skittish and didn't seem to want his photo taken. Oh, and he won't poke his head out of his burrow until late April. He knows it won't be spring until then!

It just shows that some people as they grow up also get some sense. Our ecosystem is an interaction of all living things. Sometimes one or another grows to plague proportion and needs some attention. it is never a good idea to eradicate a species.

Love your photos and I do hope he sees his shadow.

I was only concerned with them when I had horses and they were digging in the pasture..so much nicer when you shoot with your camera..we get to enjoy them too.

Woodchuck, groundhog, whistle pig, they're all the same. I love to watch them and I'm looking out my window each day knowing that soon a skinny, hungry groundhog will appear. On a farm, you do have to care for your buildings and the groundhog can cause some damage. The only other thing I have to say is, "Hey woodchuck, quit chucking my wood." (I just love that commercial.)
nellei

Phil predicted an early Spring. I'm not sure I believe him...silly rodent! I went to Punxy 6 years ago for the festivities...it was a blast!

I must admit, I still own my varmit rifels, but I have not pulled a triger in 35 years. That is when I bought my first camera.

Great story and facts! I shoot them every chance I get (with my Canon)I find them fascinating!