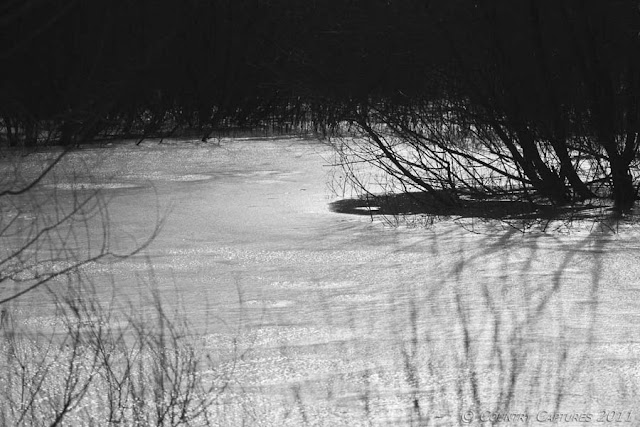 A visit to the wetlands yesterday proved somewhat of a disappointment.  A warm spell last weekend opened some of the water and Canada Geese and a flock of Mallards were present.  Colder weather during the past week had refrozen most of the open areas and the waterfowl had fled.  By shooting directly into the sun the extreme contrast of this shot makes it appear as a black&white. 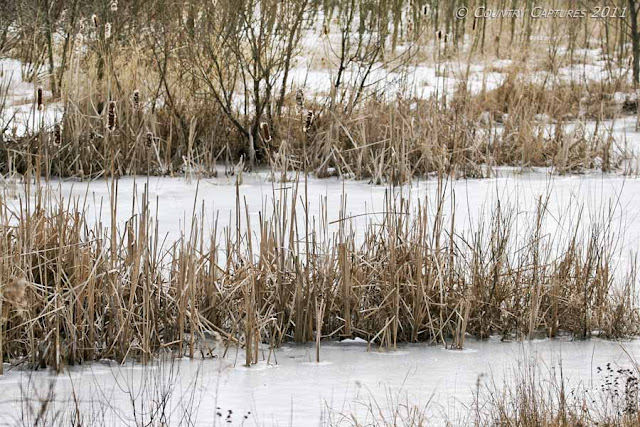 A shot of the cattails locked in ice appears as though winter still has the wetlands locked in it cold embrace. 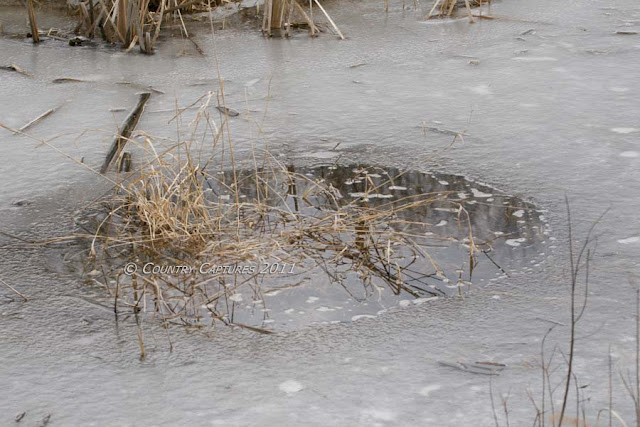 However in another spot where the water is very shallow the vegetation has adsorbed enough of the sun's energy to met the ice. 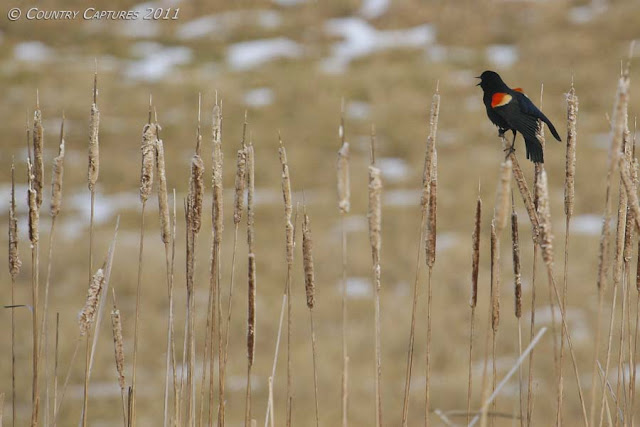 Returning home I passed a small pond where a group of Red-winged Blackbirds were hanging out.  Backing up and pulling off the road I managed this shot from the open car window.  I first noticed the red-winged blackbird's arrival last Saturday.  Looking back through my records over the past few years I see that they are right on time as they typically arrive around the third week of February.
The forecast for this week begins with warm temps and heavy rain tomorrow followed by highs in the 40's and 50's the remainders of the week.  The ice cover present now will most certainly be replaced by waterfowl as they follow the ice-out in their northward journey.
Posted by Coy Hill at 2/27/2011 07:18:00 PM

Awesome pictures Coy! I also especially like the brilliant contrast of the Red Winged Blackbird.

I really like that last picture.It is a typical scene for the Red-winged Blackbird.
Blessings,Ruth

Great shots! Can'T wait for this transition to happen here!!!

Lots of rain coming your way, Coy! Not sure what that will do to your wetlands as cold temps are predicted to follow.

Your pictures are stunning, as always. I so enjoy your blog because it's not only visually beautiful, but educational, also.

I got very excited this morning, to see a couple of Red-winged Blackbirds at my feeder. It's early for them here. Hmmm, didn't the groundhog predict an early Spring? I hope he was right.

Nice captures, Coy. Really like that last photo with the Blackbird. Nice composed.

i love the monochrome and the Red-winged!

Ah! The red-winged blackbirds must be on their way north! I haven't seen any yet.

It may have been a disappointing day as far as waterfowl go, but you made good use of your outing and got some exceptional shots, especially that last one of the Red-winged Blackbird. That is a gorgeous photo!