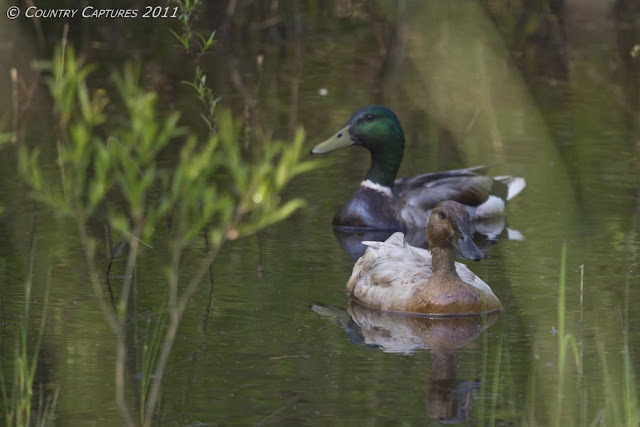 I am accustomed to spotting wood ducks, hooded mergansers, and mallards during my frequent visits to the wetlands but during a recent visit I was surprised to spot this unusual pair.  The mallard showed all the signs of wanting to flee but with his partner showed little concern.  In the end the mallard's fear won out as the pair glided off to a quieter area of the marsh.
What kind of duck is it?  Darned if I know, probably a domestic cross breed that found it preferred the marsh over waddling around lawns and barnyards. 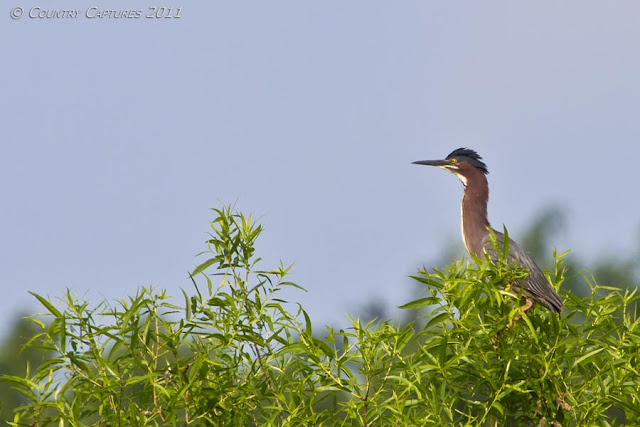 Green Herons frequent the marsh but the surrounding willows overhanging the water's edge seldom allow a chance for a photograph.  My normal sighting occurs when a green heron flushes from cover.  That all changed when this heron pick a high observation spot near my hide.  I shot a few images, none noteworthy.  Suddenly something caught its attention and for a moment its crest lifted.  The raised crest imparted the little bit of extra oomph I was looking for.
When I pick up the camera and head into the outdoors I usually have a particular target species in mind but ofttimes return having captured something unexpected.  On this particular outing my goal was to check in on the young mallards, wood ducks and mergansers.  I didn't encounter any ducklings on this visit but the odd duck and green heron more than made up for it.
Posted by Coy Hill at 6/15/2011 09:06:00 PM

The Green Heron photo is quite spectacular. I like the setting,with all that green around it.